I’m a bit delayed on updating about Annabelle Grace’s 3 month birthday.  It was actually November 23.  However, I waited on purpose!  (Cleary I’ve played catch up with a couple of other blog posts, but this one I intentionally chose to wait to write!  Why, you ask?  Because December 13 is a very special date.  Last year, Tuesday night, December 13th, we actually found out I was pregnant!  Obviously we had been trying. And trying. And trying. And losing not one, but two babies prior to Annabelle Grace.  The holidays without our first two babies were always a little more sad/difficult because we didn’t have our sweet babies here with us to put on a Christmas card or start “family” traditions.  (Will and I did plenty together, with our dogs, and had a great time; there is just always a piece of your heart missing when you think about what could have and should have been.)

Together with Will’s Dad, we all participated in the St Jude Marathon Weekend 2 weeks before finding out I was pregnant.  The weekend, literally DAYS before finding out I was pregnant I had been on a girl’s get-a-way weekend with my best friend for her 30th birthday in Gatlinburg.  Obviously with it being a 30th birthday there was lots to celebrate.  I debated and debated what I would or would not participate in that weekend.  When (losing babies and) trying to get pregnant, there is always a struggle on not “giving up” parts of life or things you like to do or “giving them up.”  I say this because when there is always a BIG FAT NEGATIVE on that intimidating little stick, or you find out that yet again you’ve lost a baby, you DON’T want to do ANYTHING that could jeopardize the baby that might be in there.  BUT, if you give up, and give up, and give up, it becomes a viscous cycle of not only NOT getting that little sweetie, but also not enjoying life at the moment.  Soooooo, Will and I would take it week by week.  There is the week you are more likely to get pregnant.  There are the weeks you probably, more than likely, won’t get pregnant.  Then there are the “waiting weeks.” During those LONNNNNNNNNG waiting weeks I would be more careful with what I ate or would drink, and what I would do.  Well, Lenise’s birthday weekend happened to fall during a “waiting week…”  There were always big moments like this where exceptions were made.  So, Will and I debated, and decided I would enjoy the weekend with this group of girls, after all, it was MY BEST FRIEND’S THIRTIETH BIRTHDAY!

So, to Gatlinburg, TN I drove.  I made it there LONG before the other 3 girls, so I had lots of time to do nothing.  Nothing but think.  Soooooo the thoughts of “what if I’m pregnant,” crept back in….. Something just kept telling me that maybe this was the time.  So when Lenise and the other girls got there, they were ready to have a drink and hang out in the hot tub and catch up.  I pulled Lenise aside and told her that I would sit on the side with my legs in, and may or not may have a drink, because it just happened to be “that week.”  All of the girls were super awesome and respectful about it; but let me tell you- it was SOOOOOO cold outside.  The struggle in my head to NOT get in that hot tub was strongggggg, but I didn’t!  So moving on……

Tuesday, December 13, at about 4pm in the afternoon, the moment came to once again pee on that intimidating little stick that has told me NO NO NO too many times to count…. Guess what?! It was a BIG FAT POSITIVE.  So guess what else?  I obviously peed on a few more of them!  Still BIG FAT POSITIVES!  Now, to tell Will…..  we had already been through this twice before, and each time I try really hard to be creative, and still make the moment fun, even though we kept losing our sweet babies.  This time was no different.  I never wanted to look back if a baby made it and think “man, I wish I would have enjoyed that moment more, or made it fun for Will.”  (Even after having the initial fun, the scary thoughts creep in fast, and you pray and pray and pray that the baby will make it.  Unfortunately losing babies takes so much of the fun naivete out of a pregnancy, but we still tried to enjoy it as much as possible!)

The two “babies” who have been through it all with us!

I decided I would tie a pregnancy test to both of their collars, and just let Will see them.  (The dogs ALWAYS get SO pumped when Will gets home.  They run to the door, they bark, they jump, they LOVE HIM!)  Our German Shepard, Wells, may as well become the tiniest, puppy version of a dog he can, because that is what his bark sounds like when Daddy shows up.  So, that was it!  The idea was muchhhhh harder to implement than I had pictured in my head….. 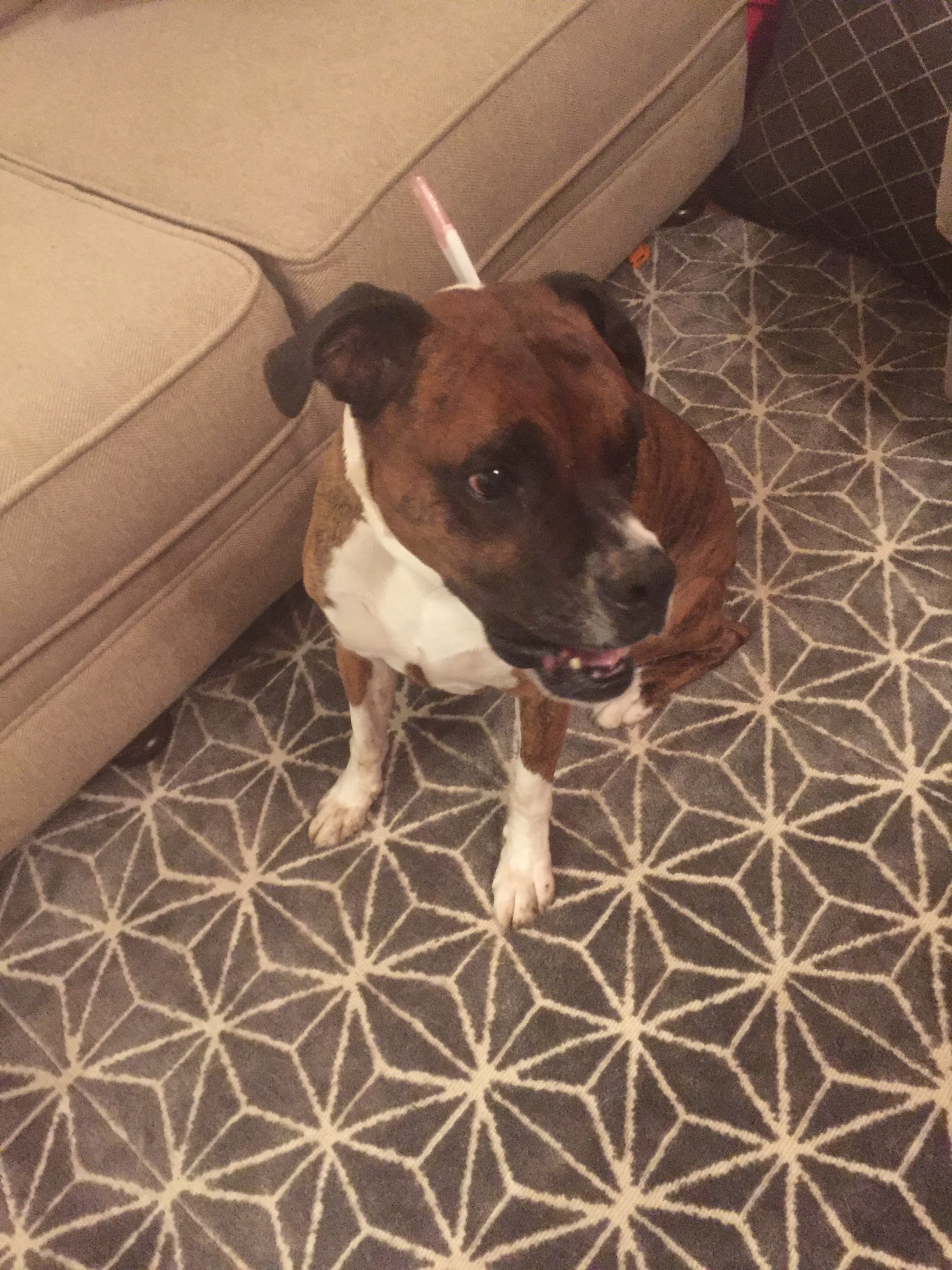 I finally got them both to cooperate though and made sure to get the best picture I could to document this moment; in case this baby would be the one that made it to Earth instead of Heaven!

I also tried to set up my camera to video the moment, but like every time before, I failed! So Will came home, found the dogs and looked at me and couldn’t stop saying “really?”  We both teared up from happy excitement, and here we are now!  (I continued to test over and over and over again….!)  I’ll share more of Annabelle Grace’s early pregnancy story in a few weeks.  Today we move back to sharing about her third month of life! 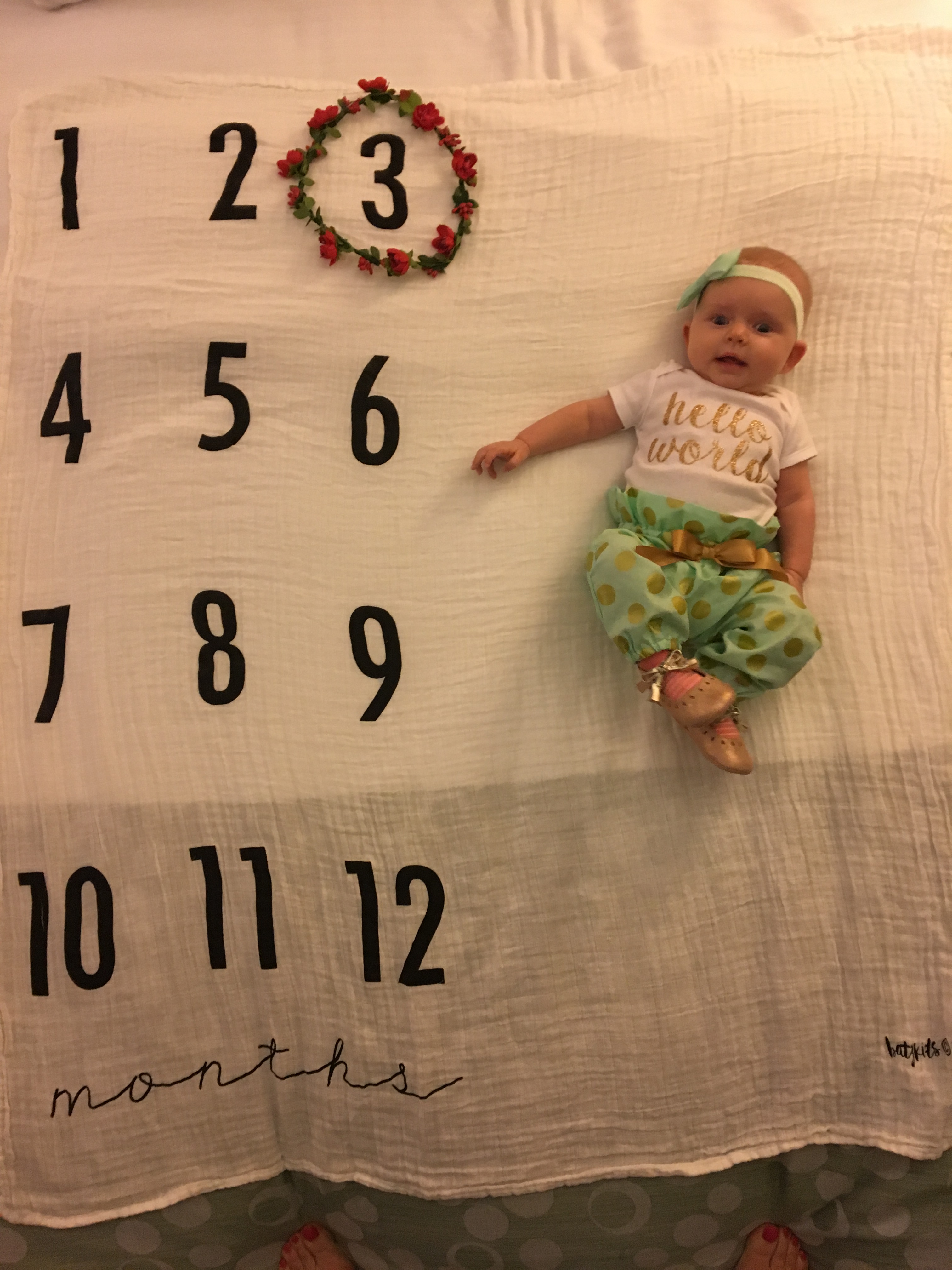 It was a big month for Annabelle Grace!  She celebrated her first Halloween holiday!  We dressed her up as multiple things, but her actual Halloween outfit was an elephant- we were a family of elephants! 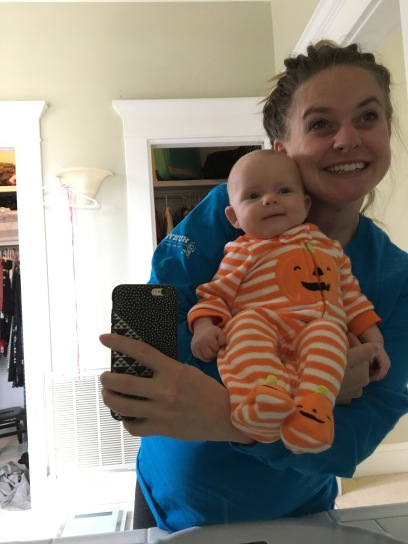 She attended her first “Thursday Lunch” at the Pillow Thompson House.

Played outside with her whole family! 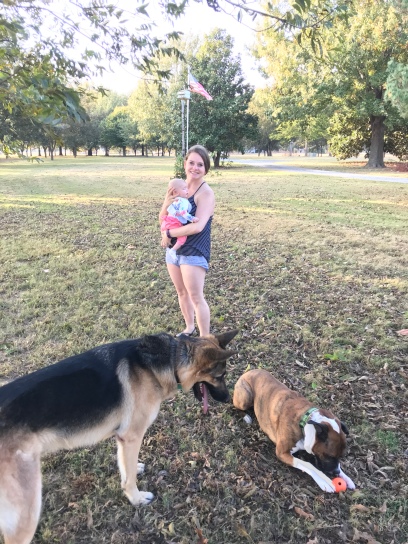 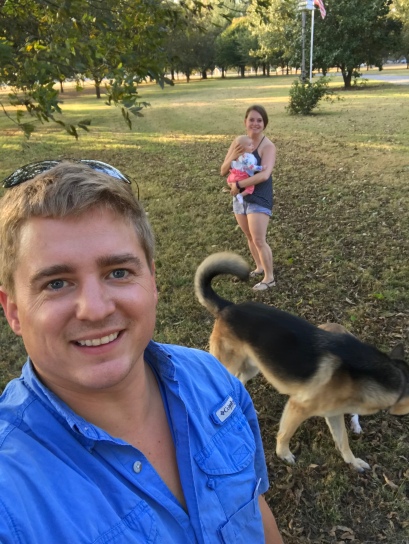 She went on her first road trip to Lake Ouachita- you can read more about that here! 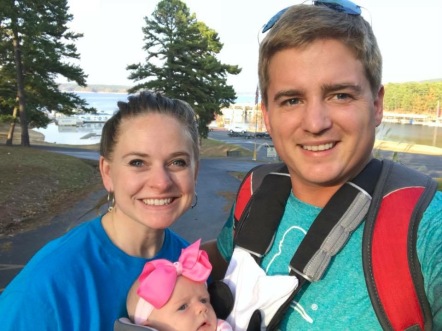 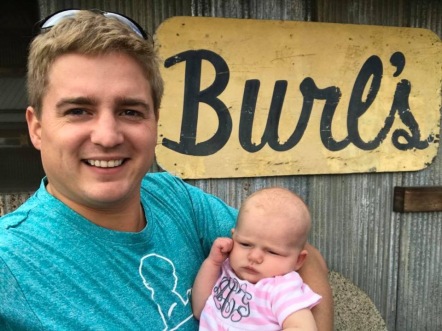 Annabelle got to meet one of my best friends, Seama! Seama is the first one of my friends Annabelle met, because Seama came to visit us in Helena!

She has done LOTS of tummy time and has really enjoyed discovering mirrors! 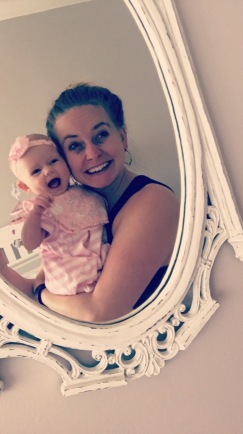 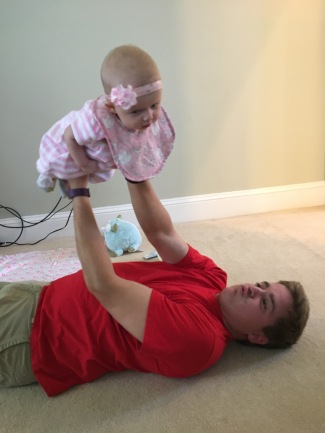 She loves her Momma and Daddy! 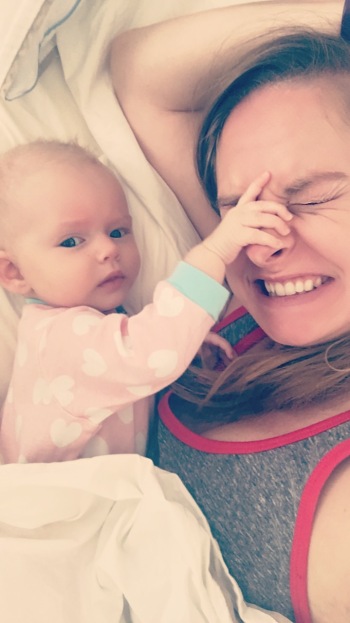 She REALLY uses her fingers and toes!

We went on our second road trip to North Carolina- a 15 hour drive (and a time change!) (She did AMAZINGGGGGGG by the way!)  You can read more about that trip here!

She celebrated her second holiday- Thanksgiving!

One of the biggest memories of her third month was getting the chance to meet her GREAT-GREAT Grandmother!

She used her voice SO much more! Like with laughing!

And obviouslyyyyyyyyy, she was always dressed to impress! 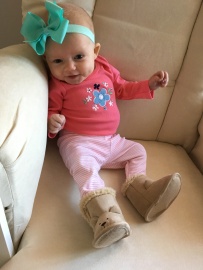 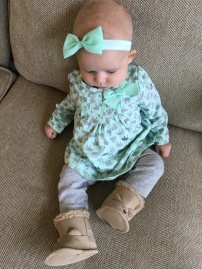 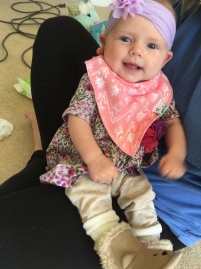 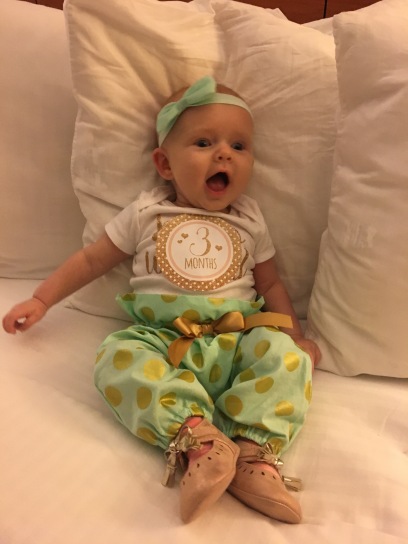 We did not have any doctor appointments this month, so we don’t have exact measurements- but she weighed somewhere between 11.1-11.5 pounds.  Her height has definitely changed!  We can tell a difference in how her pajamas fit at night.  Like I mentioned earlier-she LOVES using her voice, is intrigued by her feet, and is always holding something in her hands.  She wiggles SO much, and can turn herself in multiple directions.  She has so much drool right now that we are constantly wearing bibs to catch it all!  She is an amazing sleeper and LOVES her bedtime routine, also known as “Spa Time!”  We’re looking forward to enjoying a Christmas with our baby during this fourth month with her!

As for me and my body, 3 months postpartum- I’m super happy with it!  Breastfeeding is still going very well!  I try to pump a couple of times a day, but am not the most devoted to it- I’m happy to get an extra 5 ounces to store on a good day!  I am still doing Pure Barre classes regularly and will be running a 10K shortly after celebrating 3 months postpartum!  Will is an AMAZING Daddy and husband!  Annabelle Grace hangs out with him on the weekends some/a night or two during the week so that I can get my Pure Barre classes in.  They both seem to enjoy the time, plus, we have to make sure he gets to soak up as much of this time with her as possible right now before busy planting season rolls back around!  During this third month after having her, I have been brave enough to put on pants that button and zip!  I’ve mentioned it before that having a c-section makes it seem a little intimidating to put on anything that is going to potentially rub that incision scar for a while, even though it doesn’t hurt AT ALL now.  It’s just a mind thing!  Since I’ve been brave enough to put my big-girl pants back on, I’ve also discovered that my pre-pregnancy pants still fit! Woo-hoo!  My ribcage has definitely expanded some from carrying sweet Annabelle, as some of my shirts and dresses fit differently than they did before!  My weight is still where it was before getting pregnant, and the area above my incision is slowlyyyyy looking more and more normal.  Will and I both laugh because my belly button is just a strange thing now! Annabelle Grace DEFINITELY stretched it out!  Either way, I am still super proud, confident, and happy with everything right now! 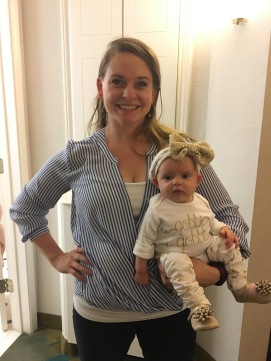 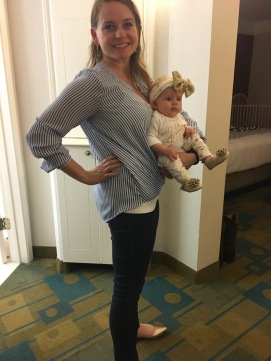 I am absolutely LOVING this season of life getting to be a stay at home mom, and I am so thankful that Will and I planned so well before she was born and are able to make it work.  My days with this baby are even better than the days I had imagined in my mind while waiting to get her.  I will forever be thankful for those little pink lines last December 13, 2017 that God decided to let stick around!

3 thoughts on “You Became Ours {3 Month Update}”