“Roll out those lazy, crazy, hazy days of summer; you’ll wish that summer could always be here…”  -Nat King Cole

Summer trips to the beach have always been one of my favorite times of the year to look forward to!  My family has taken a beach trip every year since I was born, and even then I could never get enough- so I would also take random one day trips with many friends to the beach when I lived in NC!  Since moving to Arkansas, I haven’t been on a beach trip since 2013!  Will also has never been to North Caroline during a warm month- he’s only been in November and December, so this was a long-overdue trip!

Of course packing for us is always an adventure! I even felt the need to bring my mixer… That I didn’t even get to use! But hey, I had it, just in case! We finally made it in around 12:30am Saturday morning!  My parents and Nana had made it down a little earlier Friday night and were waiting up for us when we arrived!  Always the best feeling when you make it to one of your favorite places and it’s filled with your favorite people!

After sleeping for a while my parents, Nana, Will and I all went to one of our favorite restaurants that is actually located in Southport- Provision Yacht Basin Company!  (Which by the way, is a Sysco customer!!) The restaurant is actually located on the dock at Southport and you eat and dine on the dock.  We ate there twice before leaving.  (Will and I went back for lunch or dinner one day ourselves too- we had shrimp and a crab cake that were both fantastic!!) 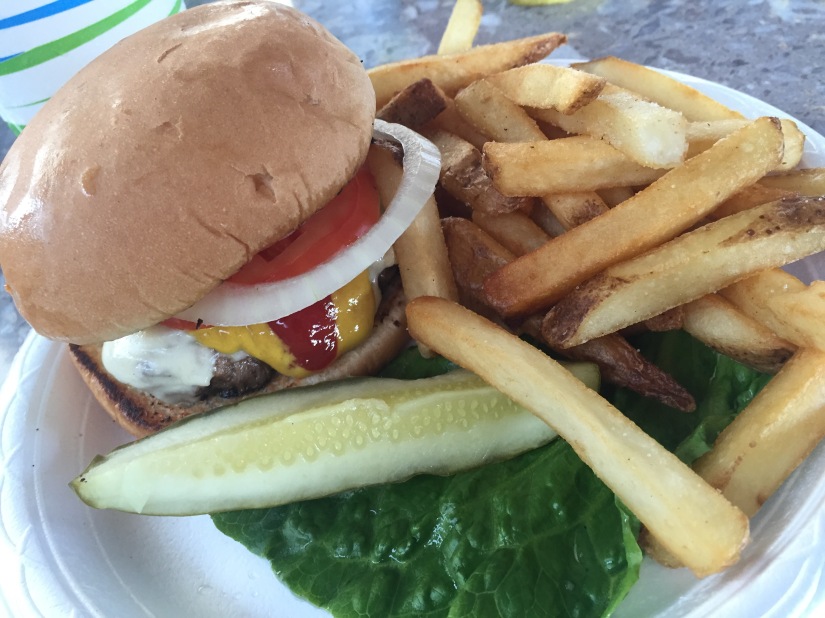 That afternoon after lunch, I HAD to take Will to the one place I had talked about more than anything- Britt’s Donuts.  Britt’s Donuts is known as one of the best donut shops in NC.  The only type of donut they make is a glazed donut, and you can get milk, coffee, or water to go with them!  It is located on the boardwalk at Carolina Beach.  For you Arkansas readers- their donuts are similar to Shipley’s!  I’m glad we chose to go on Saturday afternoon as well, because they had not opened on weekdays yet until this coming week!  Will was like a child waiting in line and watching! (The line for these donuts actually gets longer than the line in my pictures below!)

Inside you can see them making the donuts constantly and their walls are lined with magazine articles and new papers clippings about them!  The donuts are well worth the wait! 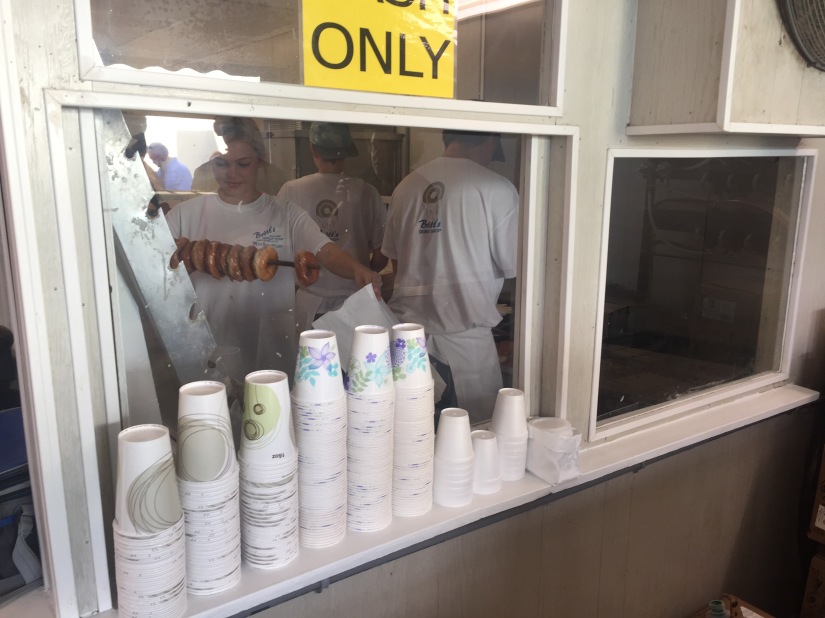 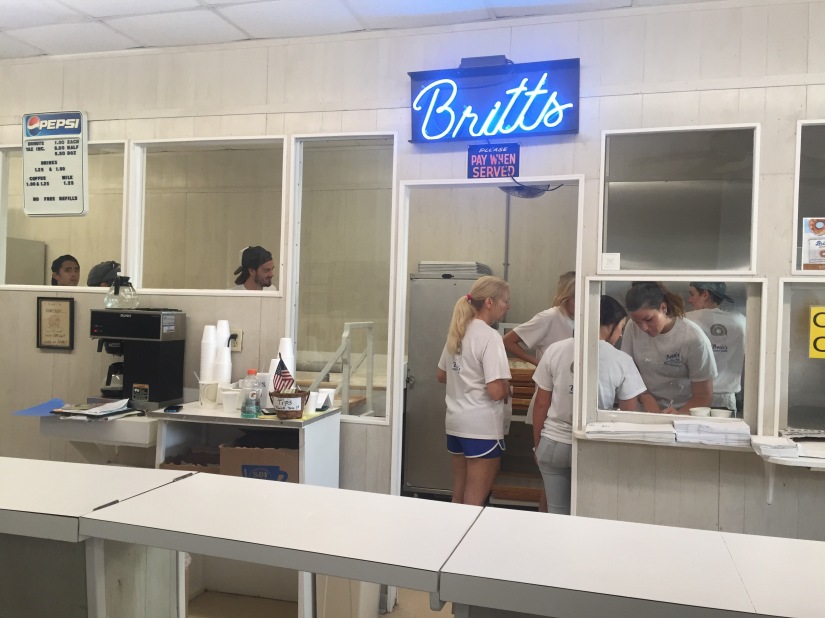 Will couldn’t wait to try one… Then when I tried to take a picture of us with them, he had crammed another one in his mouth… Yes, we bought 3 dozen! My Nana and Jubee LOVE these donuts as well and asked for us to Bing some back to them too!

I also took Will into the arcade my sister and I loved to go to every night and we played games!  We also walked on the Kure Beach Pier, and I took him to the Fort Fisher Wall!

The tide happened to be extremely low, and when you catch it that way you can sometimes go all the way across.  I’ve done it once before with my Dad, and he and I had the best time doing it!  When I noticed the tide was out so much, I had to see if Will and I could do it too! We did make it across, but the wall is a lot more broken up than it was when my dad and I did it, and it was bad then!  When the tide is up, it covers most of the wall, so you have to try to cross at just the right time, or you won’t get back to the main land. 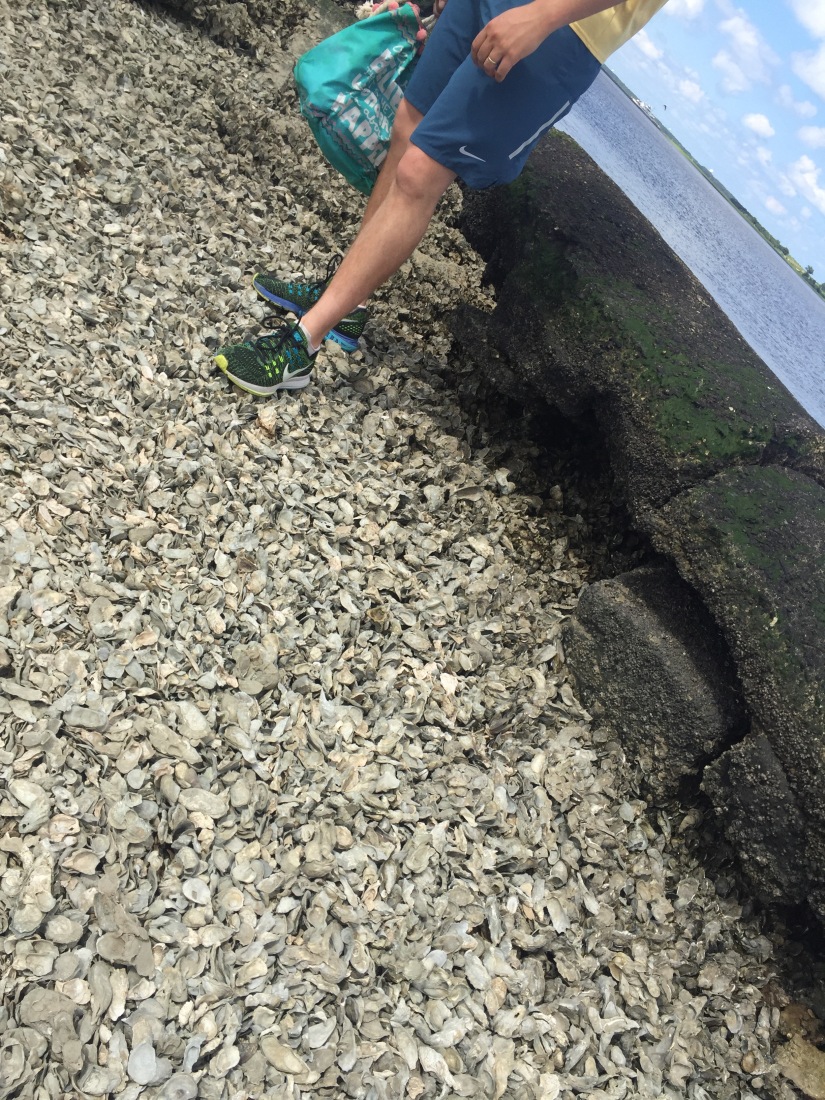 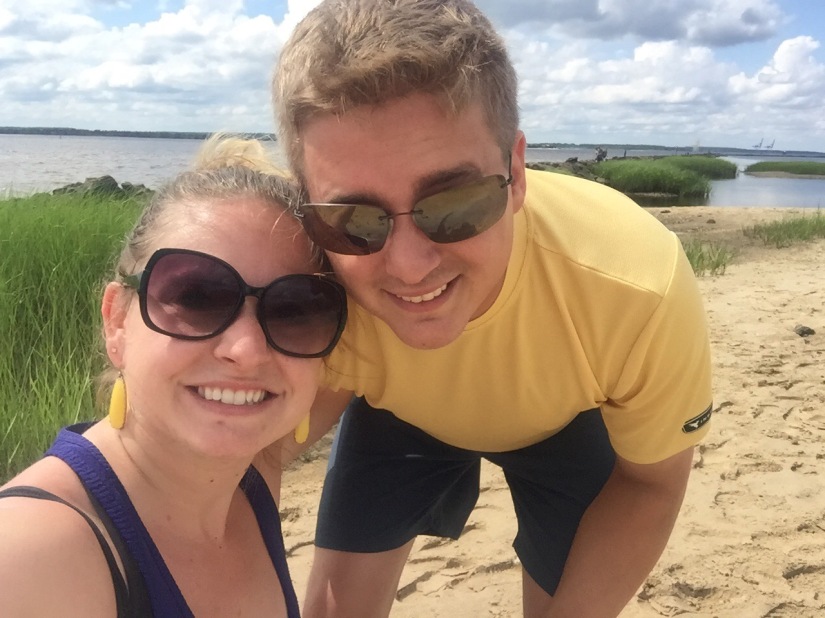 Will also didn’t seem to realize that I was videoing is after we crossed!

​
Sunday was our first beach day! The whole family had lunch at Oak Island Seafood Restaurant, and it was delicious!

Once we were done it was time to head to the beach!  The weather was a bit windy and a little cool, but going out on the beach still had to happen!  My niece, Ava, LOVED the ocean!

Once Monday rolled around, it was time to fit in everything possible!  My Mom was able to schedule a tour of the Caswell Beach Lighthouse, and we climbed all the way to the top!  It’s always so fun to get to the top and look around! 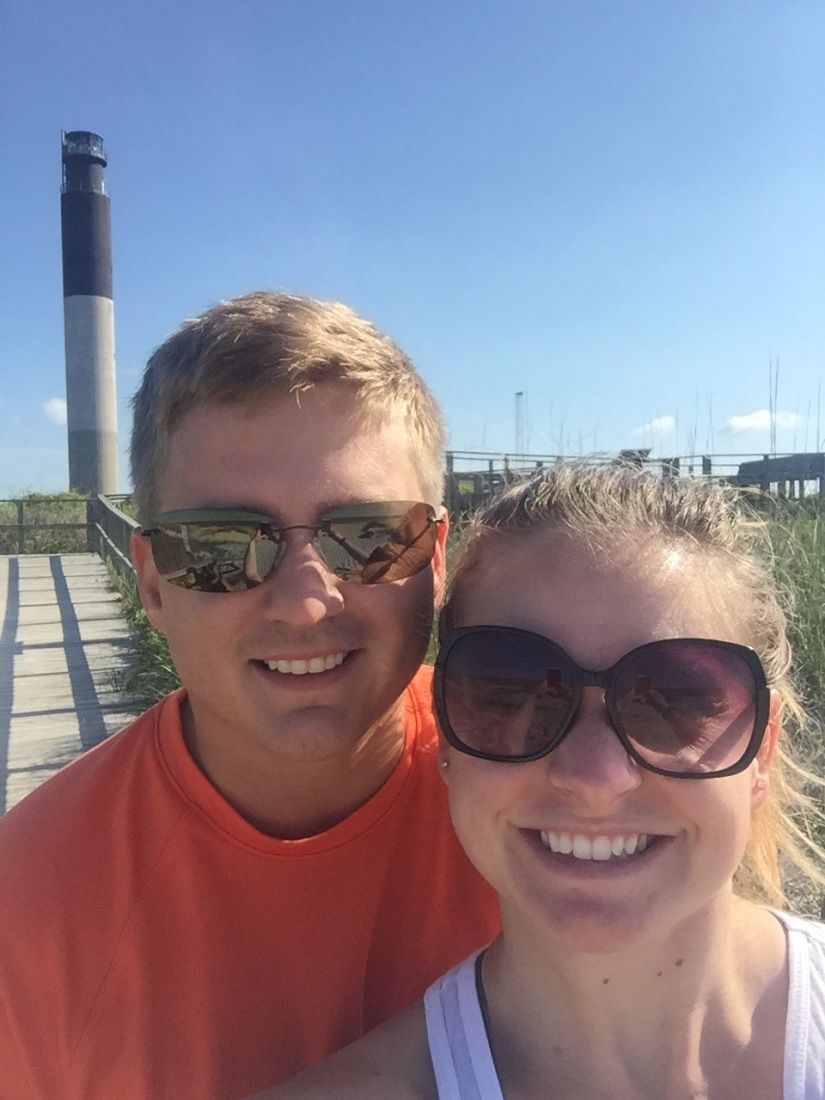 We made it to the top!  I somehow didn’t get a picture of Joe and Cathy, but they too climbed to the top!! 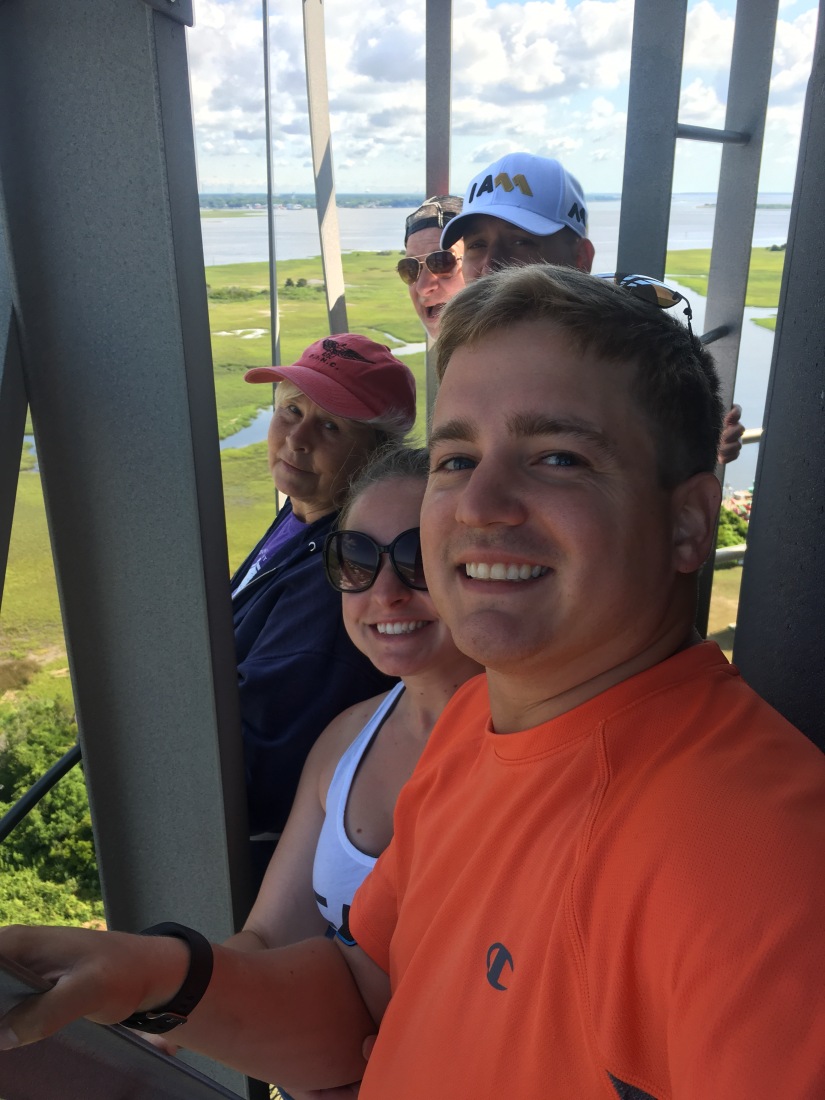 We looked down, of course!  If you look closely you can seen my sister, Ava and Kylie running around at the bottom! 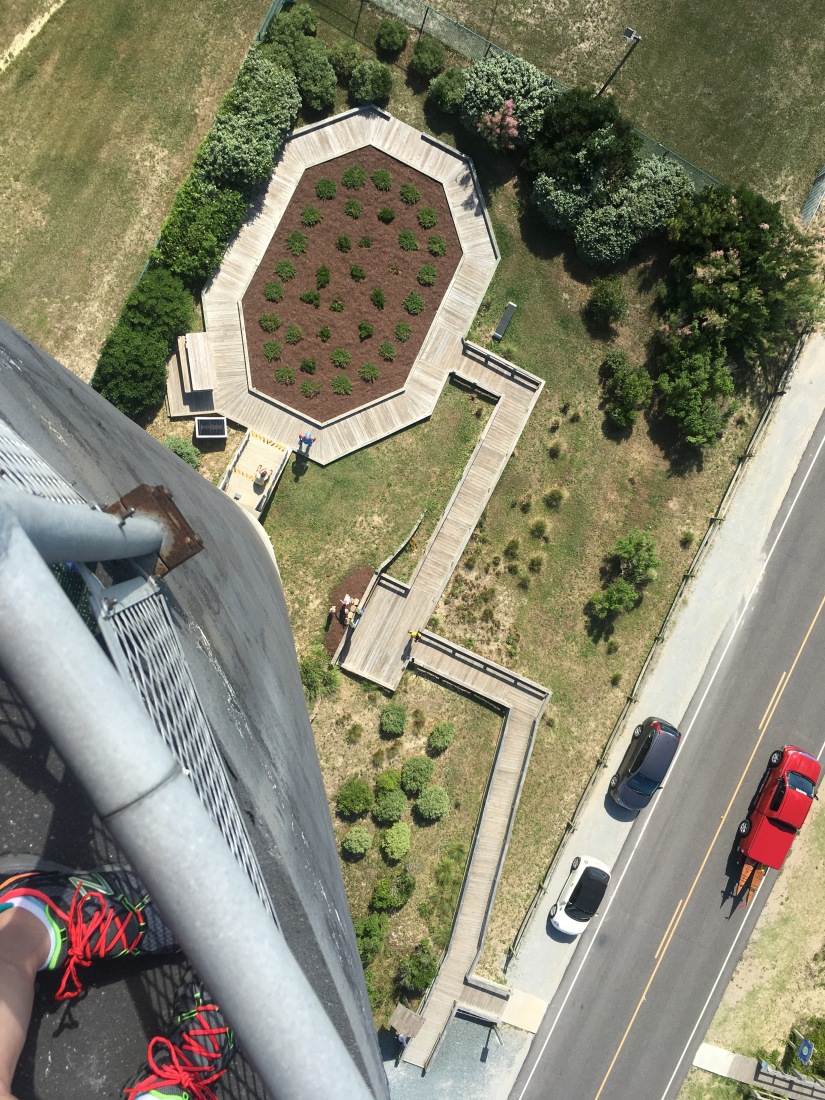 Then we climbed back down! You can see my parents going down in the first picture, and the one of us is not so flattering, but it’s fun to see the inside, so I included it! 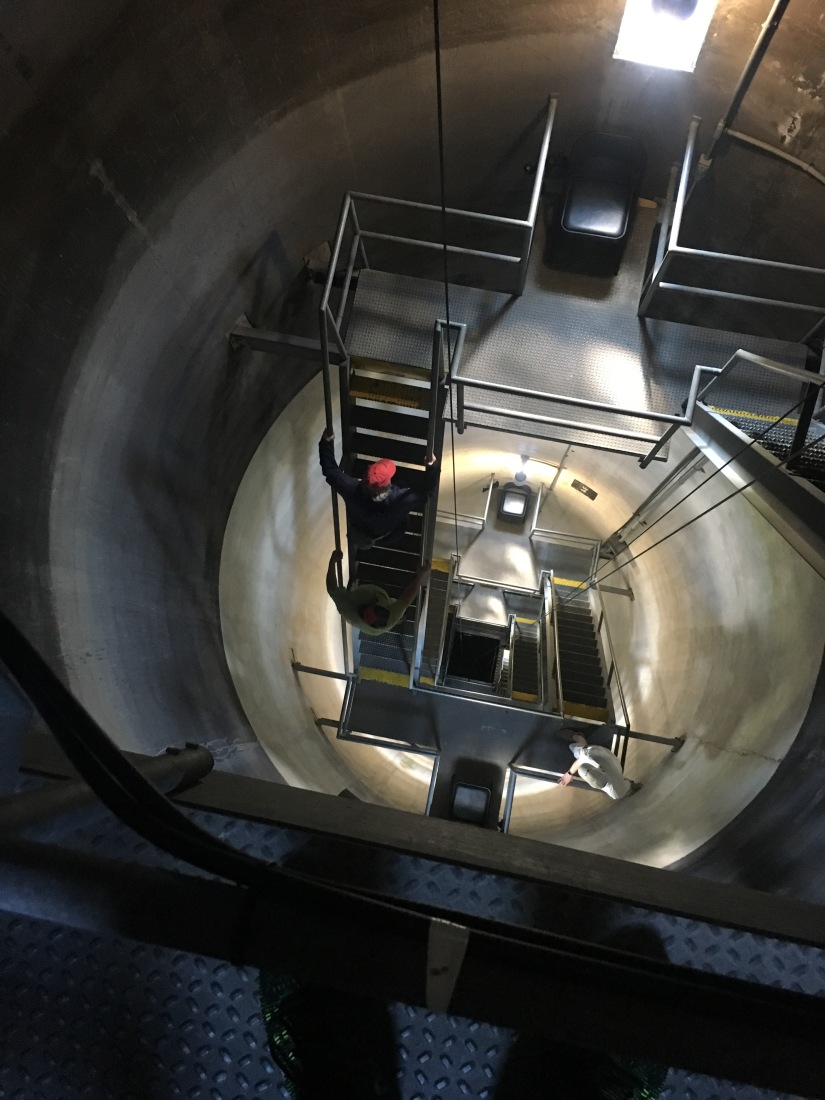 Of course there was more beach time!  We had one really great day with great weather and everyone played!  Will was determined to build a sand castle and go body surfing, Kylie wanted to play chase, Ava had me carry her through the waves, my Mom fished, Dad and Joe watched all the excitement, Cathy looked for shells, my mom talk Nana and Jubee in to getting in the water, Jubee took a great big fall, and we all laughed and had the best time.  This particular part of the trip honestly became my favorite part.  It is just so few and far in between when we’re all together, and just able to cut loose and have fun! 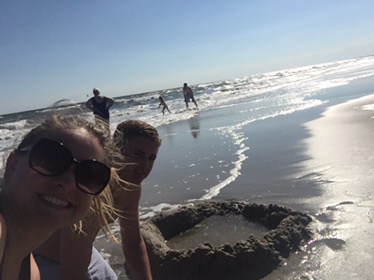 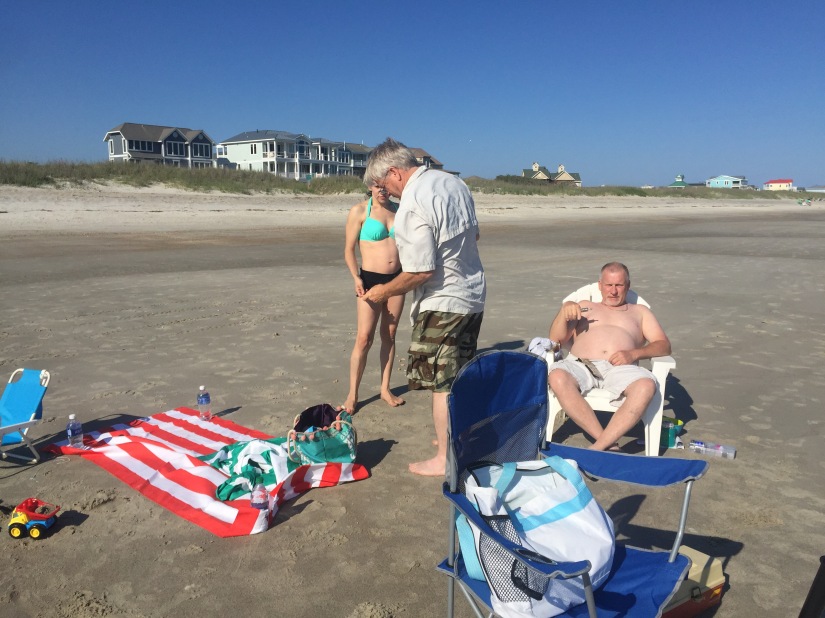 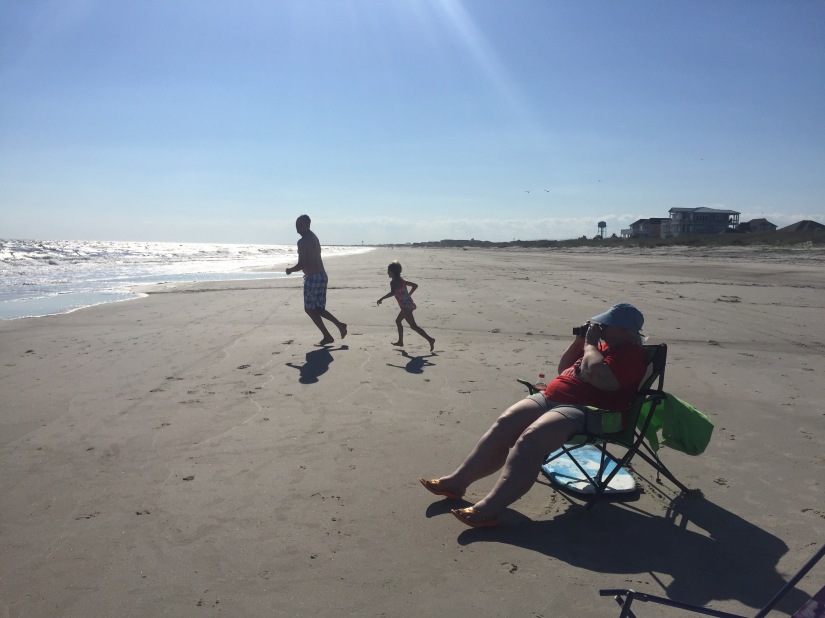 We took another family trip over to Carolina and Kure Beach.  I don’t believe I mentioned it earlier, but you can actually take a ferry from Southport to Fort Fisher which always makes the trip even more fun! 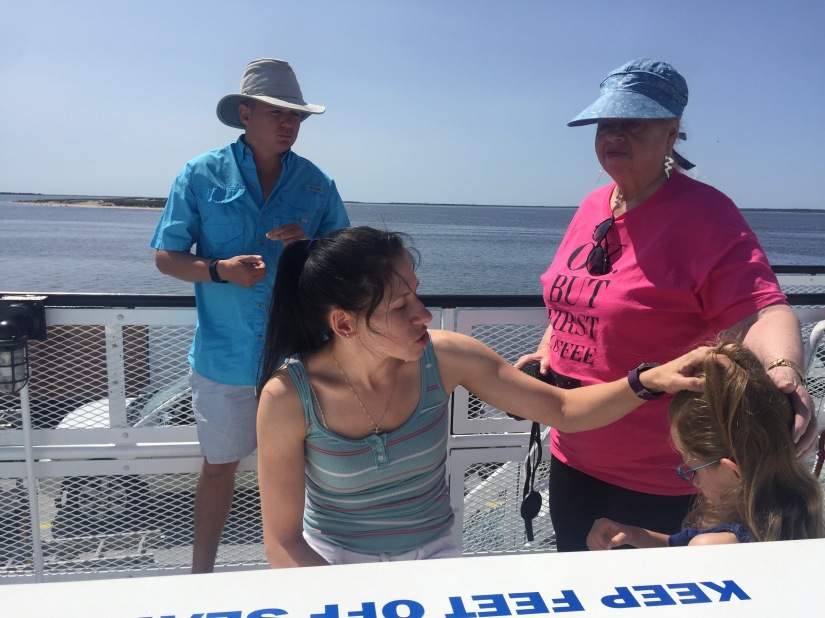 We went by the pier again, and then all parted ways for bit-

Will and I had lunch with my sister and her husband Brad and their two girls, and then I showed him the rocks at Fort Fisher.  It’s such a pretty and peaceful area!  This partic Lar spot made us miss the ferry ride by less than a minute though, so we had to wait 45 minutes for the next one! 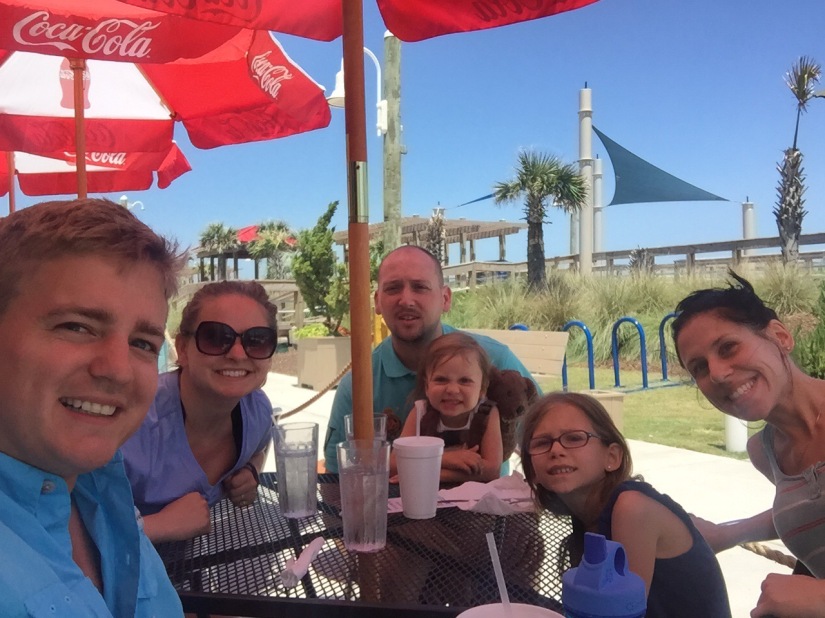 Of course Will did get the grand tour of Southport.  Most days while at the beach we tried to run and/or walk, as Will is training to run a full marathon with his Dad in December.  Southport is such a beautiful port town, and where several movies and TV shows have been filmed, including Nicholas Sparks’ Safe  Haven. Soooo, instead of running on the beach one day, we chose to go around Southport!  We also walked around one night after dinner when the sun was setting! 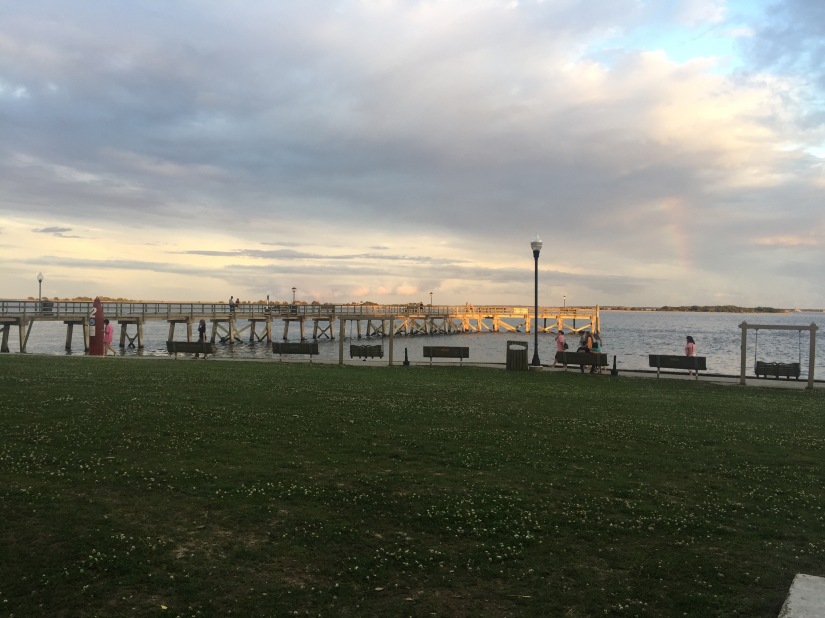 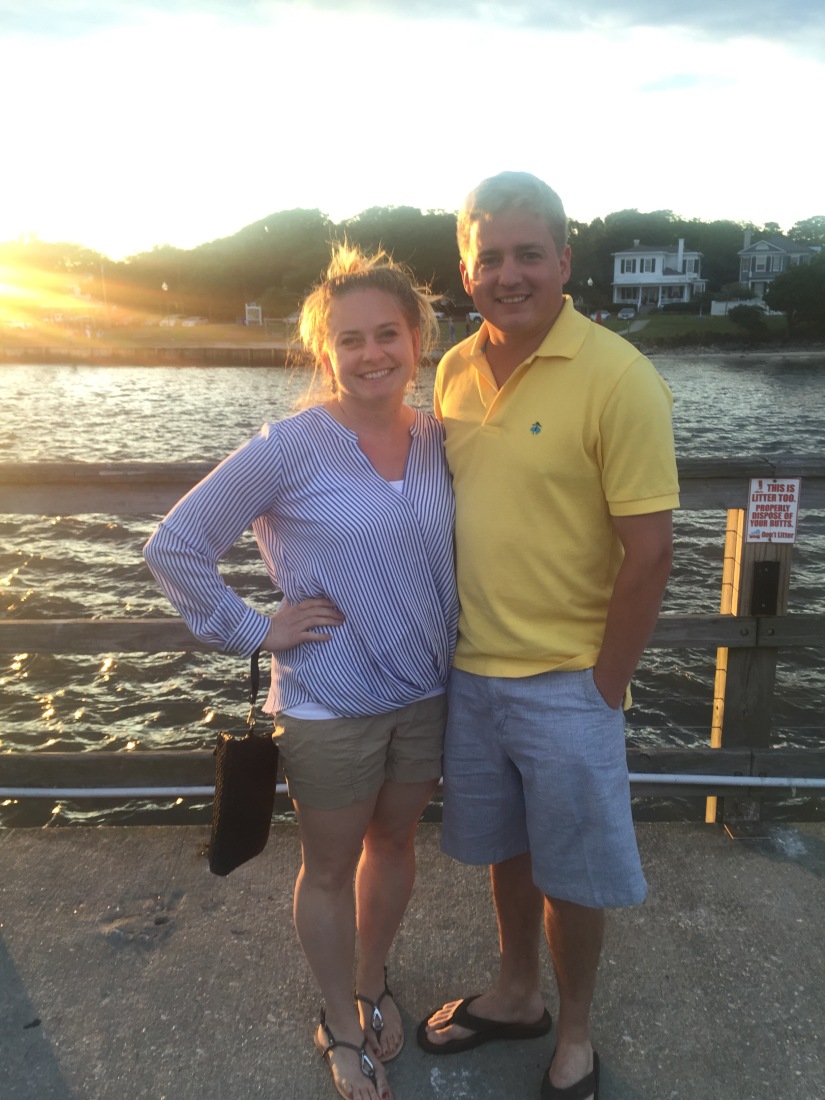 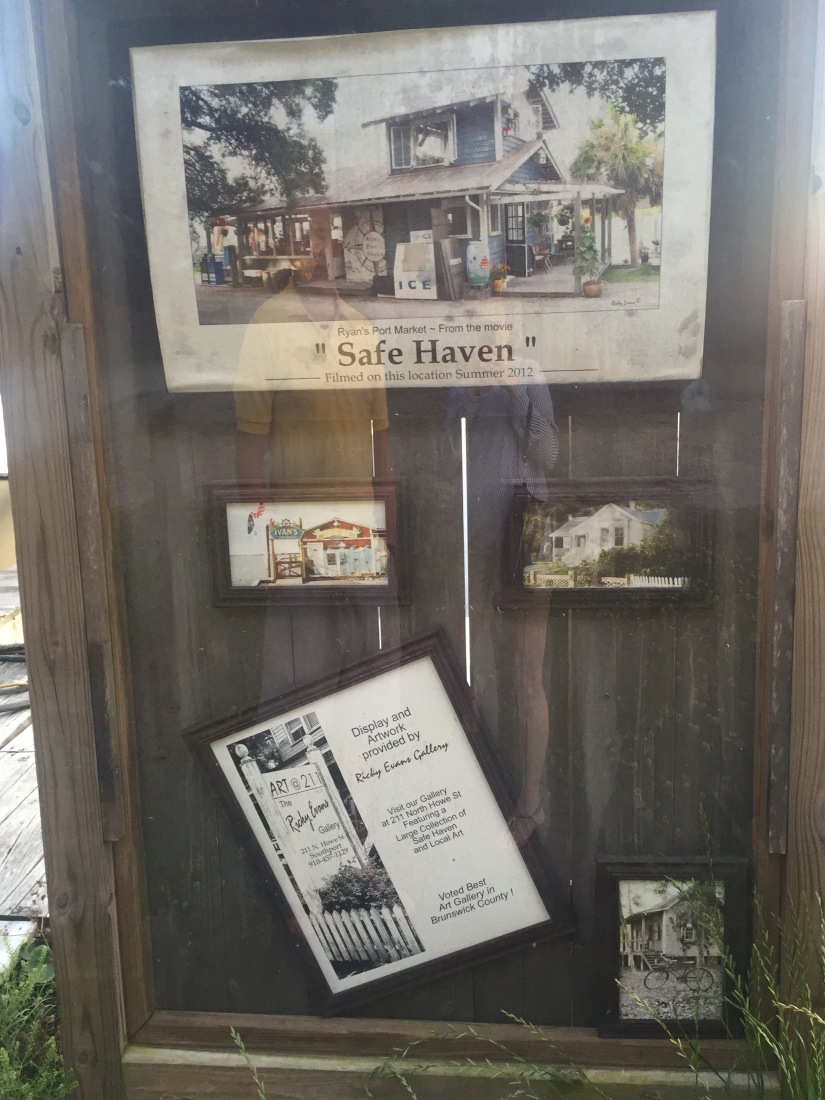 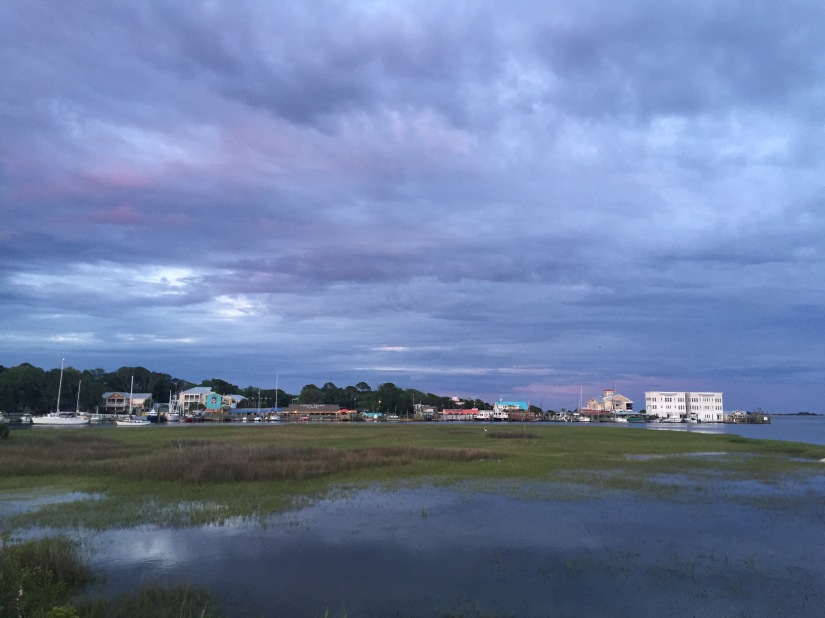 The last night we had such a great dinner with my parents at a new Mexican restaurant!  The food was great and there was plenty!

Unfortunately the trip did come to an end and it was back to reality for Will and I!  My parents, Joe and Cathy, Nana, and Jubee all head home later this weekend!  We waved goodbye and headed home for the long drive! 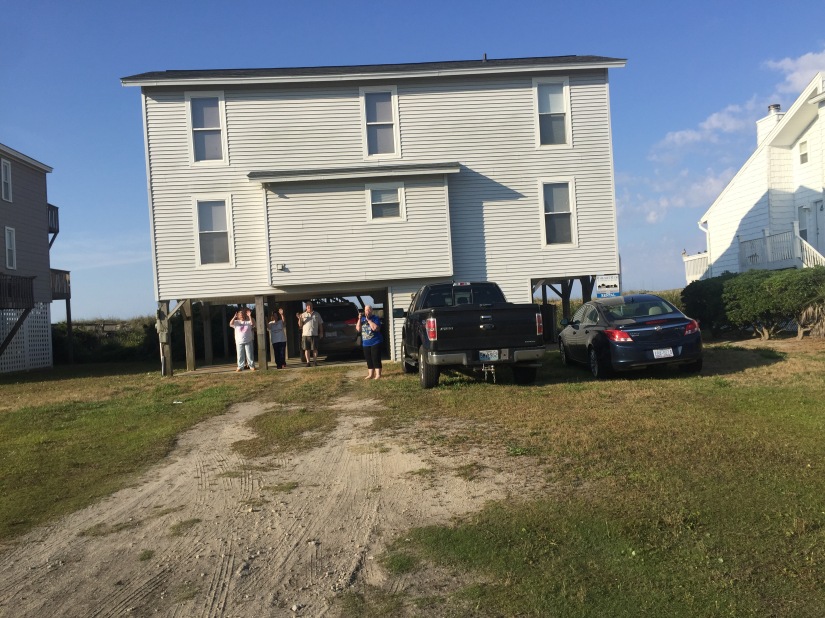 The most interesting part when returning home was picking all of the animals up from the vet!  Usually Will does this with his truck, so fittin them all in the car was interesting!  We made it home in one piece safely and soundly!

The trip is over for the year, which is sad- but we had a GREAT time.  Now, it’s time for Will to get back on the farm and probably go non-stop for most of the summer!  Until next time North Carolina!!!