So the story of Michigan begins with a late night road trip!  We drove until about 2/2:30am and finally stopped to take a 3 hour nap! Hello from our room!  We sure did look sleepy!

On the ride up we did see a windmill farm and that was pretty cool!

Michigan is one of the places Will grew up going to as a child for family vacations.  His family stayed in a cottage known as “The Pines” growing up, and now “First Light.”  These cottages are part of a place called Epworth, found in Ludington, Michigan on Lake Michigan!

It honestly worked perfectly for us to get to go over the fourth.  My vacation time has been given to me and it just so happened to rain a few days before we left, making Will feel even more relaxed to go on a trip!

A lot of Will’s family were also able to be there for parts or all of the time we were.  His parents, grandparents, Aunt Kelly, brother Clancy, and cousins Hannah, Sarah, and Sarah’s new husband, Jeff.  Several of his other family members were also there over the weekend in other cottages that I got to know a lot better- his Aunt Lucille, Aunt Lynn, and cousin Lucy, to name a few.  Will has not been on his family trip for about the last four years, so he was like a little kid he was so excited to go back!  (Next summer, that will be me!) Here are some of his cousins/brother: (thanks to Lucy and Hannah!) 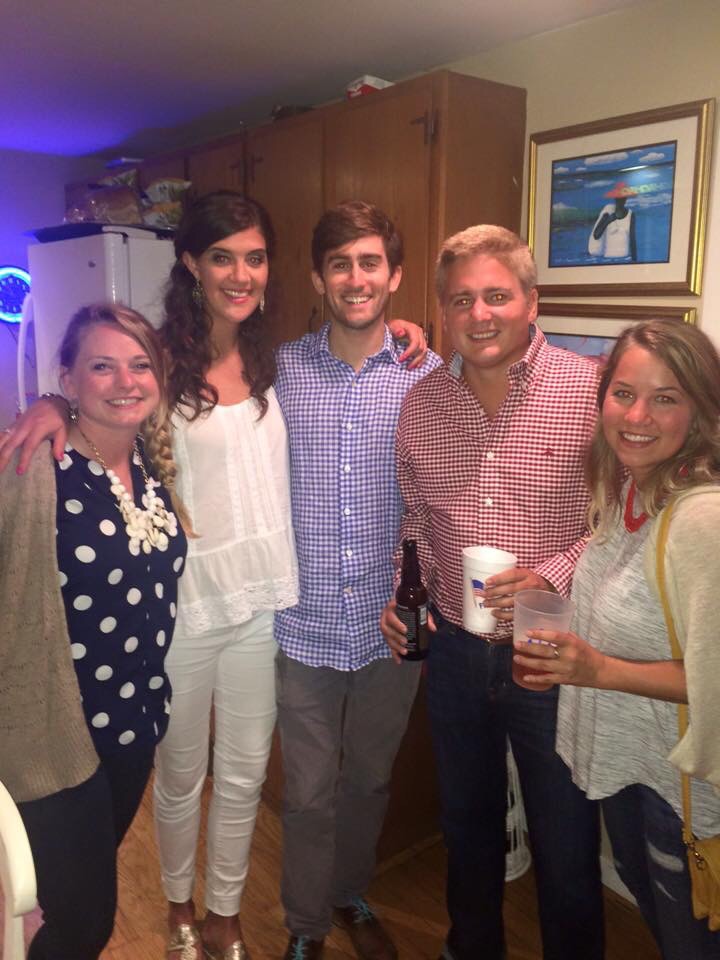 So here’s the recap of everything we did! (Which was a LOT!). First off- we had plenty of beach days!

We watched the Badger, the car ferry, leave Ludington one night…. The boat is HUGE!! Look at it in the video!  Also, look at it beside a regular speed boat in the picture below! 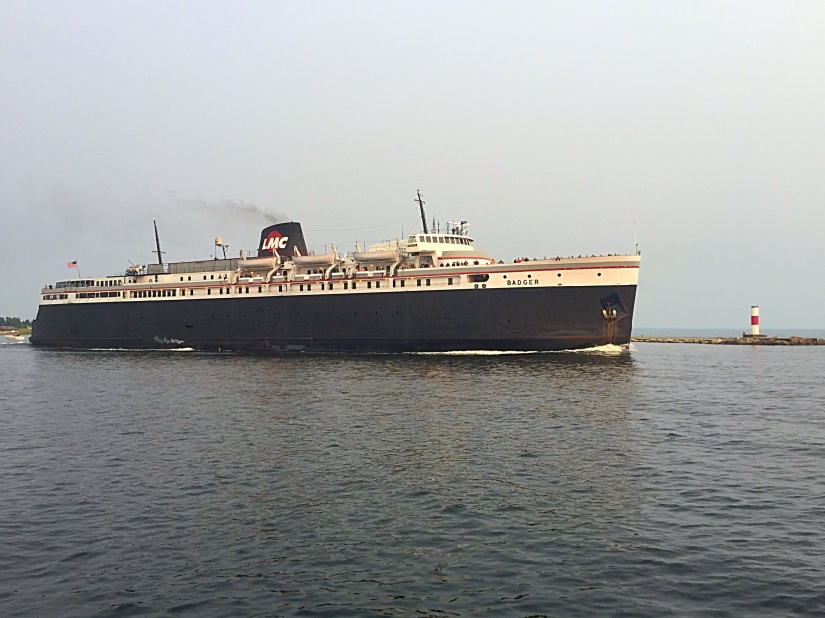 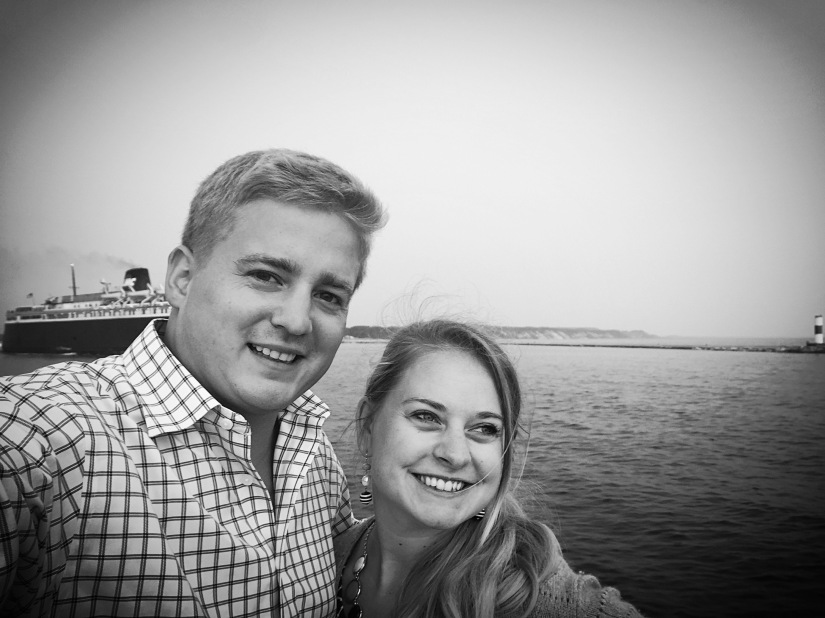 To see the Badger leave the harbor, we walked out on the cement pier down to the Ludington Lighthouse.  It’s about a 3/4 mile walk out to the lighthouse. 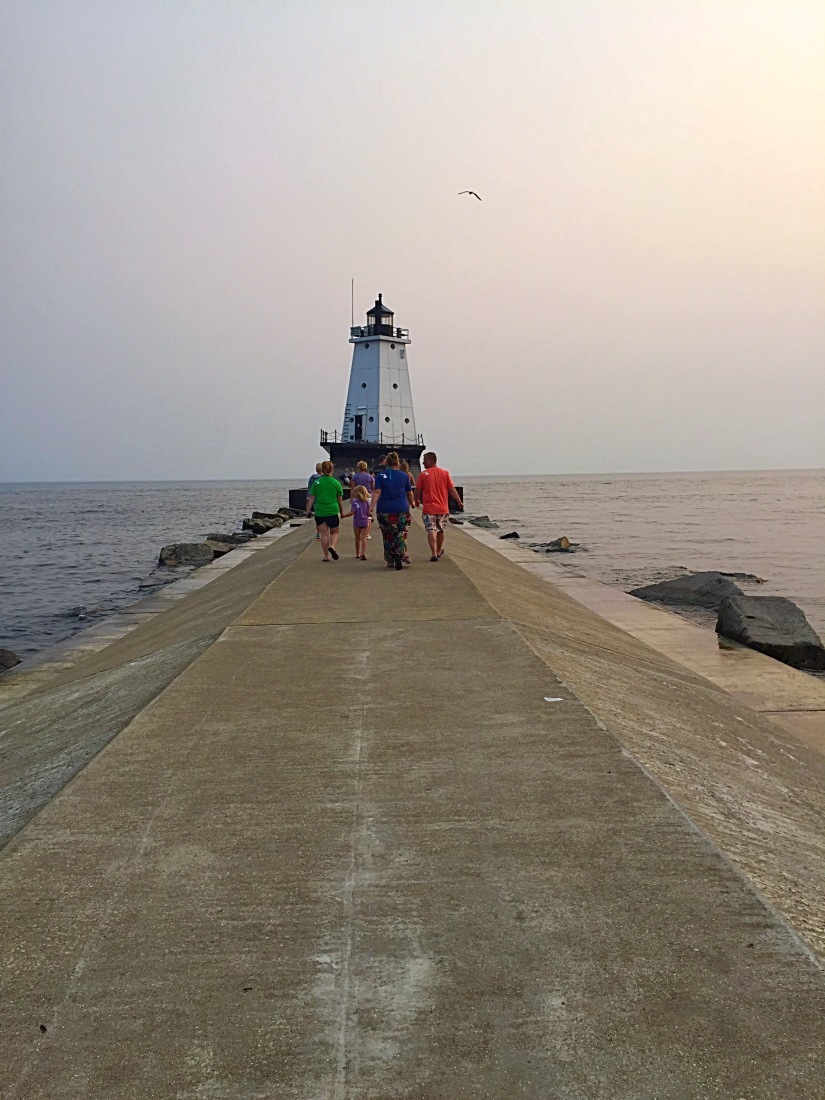 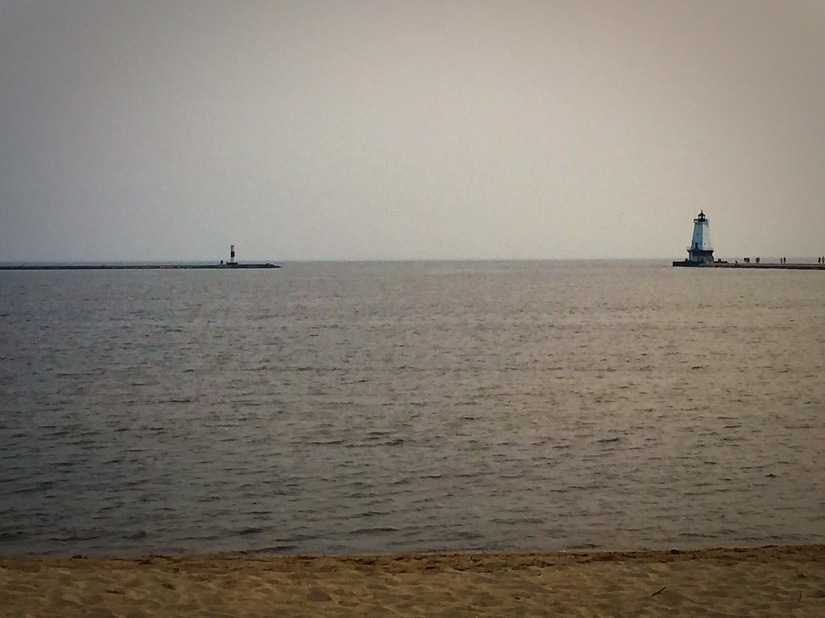 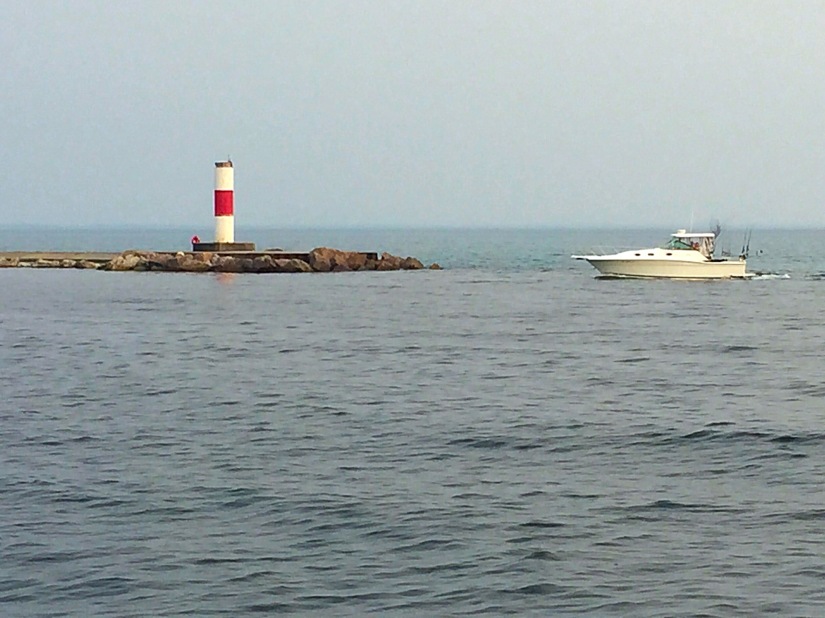 The little red and white lighthouse is just on the other side of the harbor.

By the time The Badger got through the harbor and around the Ludington Lighthouse, the sun was setting.  I got a really pretty picture of it, too!

Of course you have to get a group shot, and the perfect sunset shot! 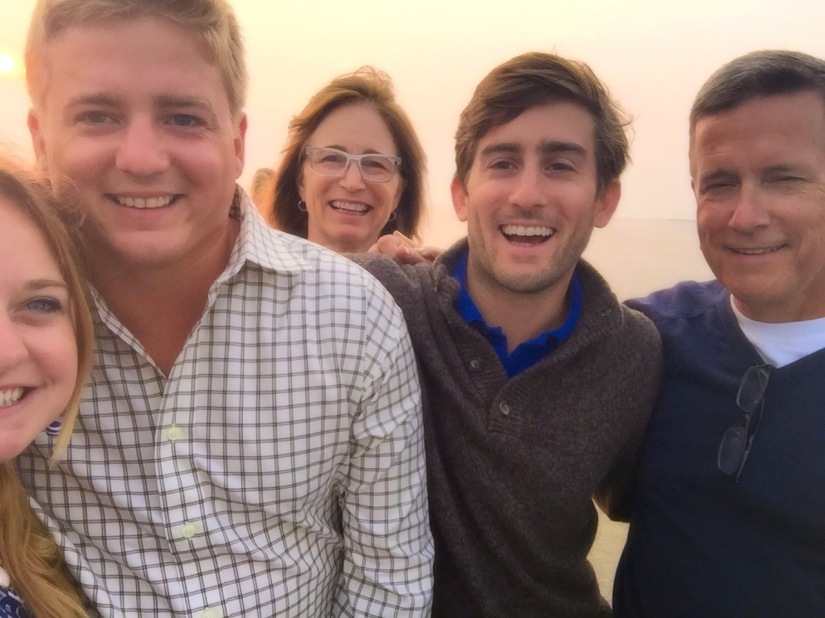 One evening everyone pitched in to help make a family dinner.  Will’s dad, Ted, his brother Clancy, and Will worked together to make the steaks…. (Will and his brothers ALWAYS give their dad a horrible time about his steaks.  His steaks always turn out really well though.) this particular night they all worked together and complimented them more than usual! Soooo of course I had to document it!

I made my mini pecan pies…

Jeff made okra, his dad made cilantro-rice, and his mom made a salad!  It was wonderful!

We had another larger family dinner on the fourth with ribs, coleslaw, baked beans, Barbeque and more!  Another fabulous meal! 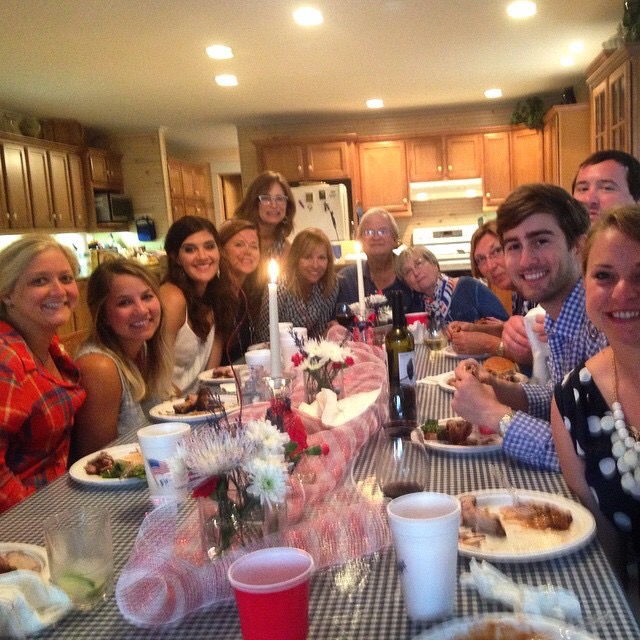 There was also PLENTY of ice cream to be had! Ice cream is one of my favorite traditions on my own family beach trips, so I was happy to partake in it with Will’s family.  Most ice cream comes from the Coffee Shop, which is located on the beach.  They only have about six flavors, but scoop a great scoop of ice cream!  There’s also a place called House of Flavors that was pretty amazing!  They make all of their ice cream and that is something I can appreciate!  Needless to say, we had a cone most days!

There are also HUGE sand dunes all over the place.  The one cool thing about them is you can walk on them, climb them, and drive on them!  On the beaches of North Carolina you get in lots of trouble if you’re caught on any of the sand dunes!  There is one sand dune known as BlueBell that apparently all the kids climb and play on!  So we took a walk to go see it… The picture does not do it justice! 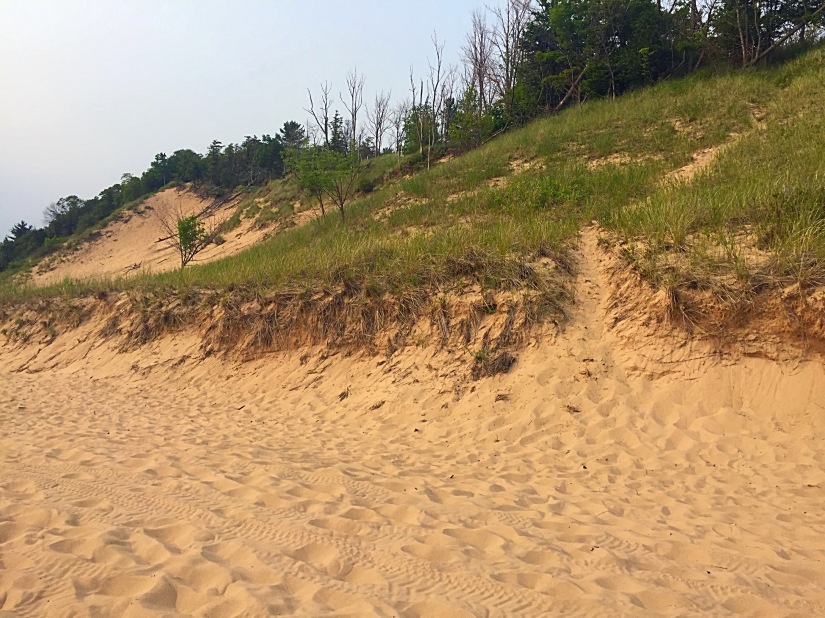 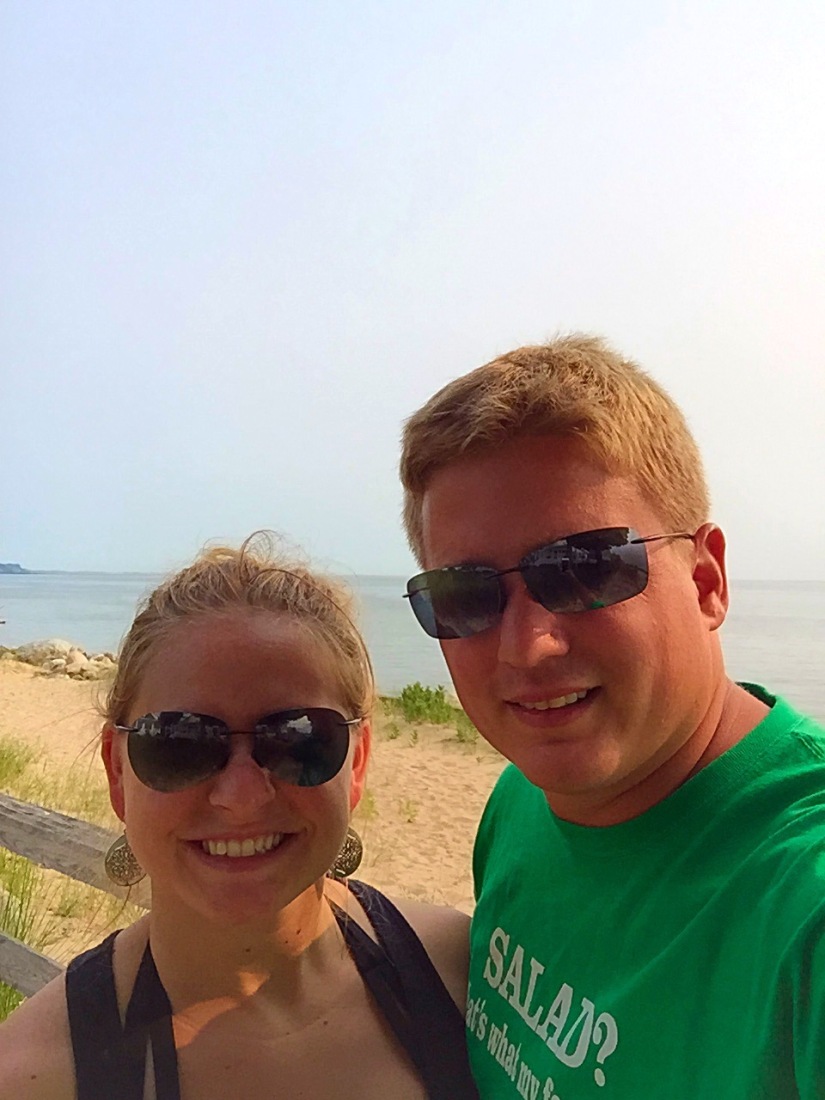 We also visited Hamlin Lake Dam and the state park.  Both were so pretty!  The water at the state park was so many different shades of blue!  Someone had also built a really cool teepee of wood!

There were plenty of great meals to eat, of course!  One place we ate was called Barnhart’s. The atmosphere was nice because we got to eat out on a deck over the lake!  It reminded me SO much of Provision Company in Southport!  At the State Park there is a little shop called Bortell’s.  You go in, order fresh fish, they dry it up and serve it with fries and coleslaw.  You take it and eat it anywhere you want!  The Lake Perch was so tasty!!!! 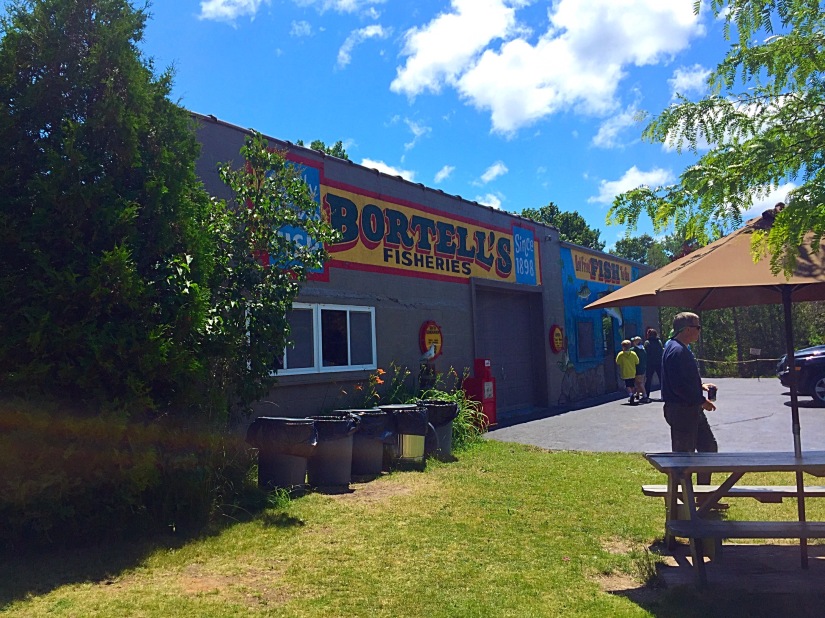 And because one lighthouse wasn’t enough, we took on a second lighthouse!  Big Sable! It was a two mile walk out to it one way through the sand dunes! We got to climb to the top as well- it was super windy!!  (I pretty much worked the entire walk to the lighthouse… Such a dedicated employee!)

Then of course Will and I had a date day/night.  We went on some nature trails, a walk on the “high walk” and dinner at a local place called JamesPort Brewery.  The food was excellent, however we are positive thAt my Lobster Mac and Cheese was most certainly Crawfish Mac and Cheese.  A true southerner can tell the difference! 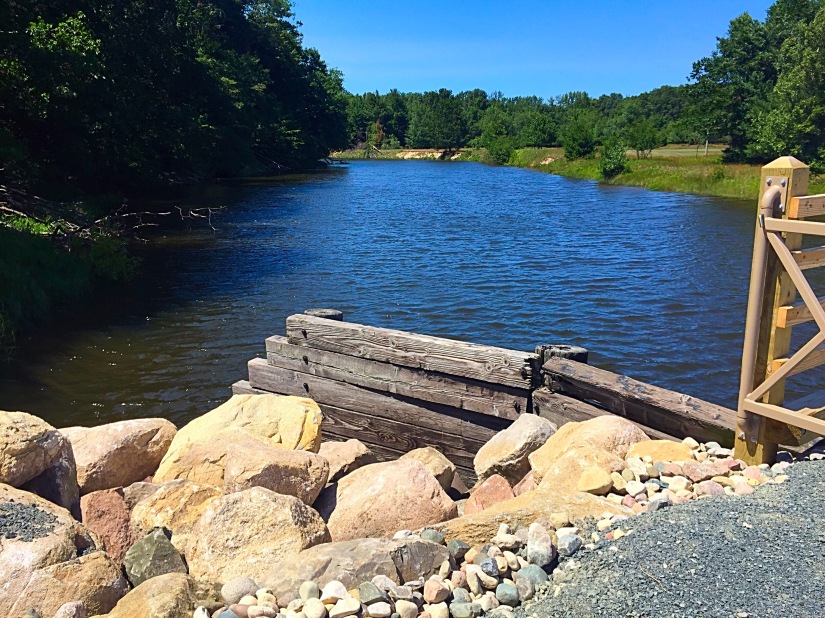 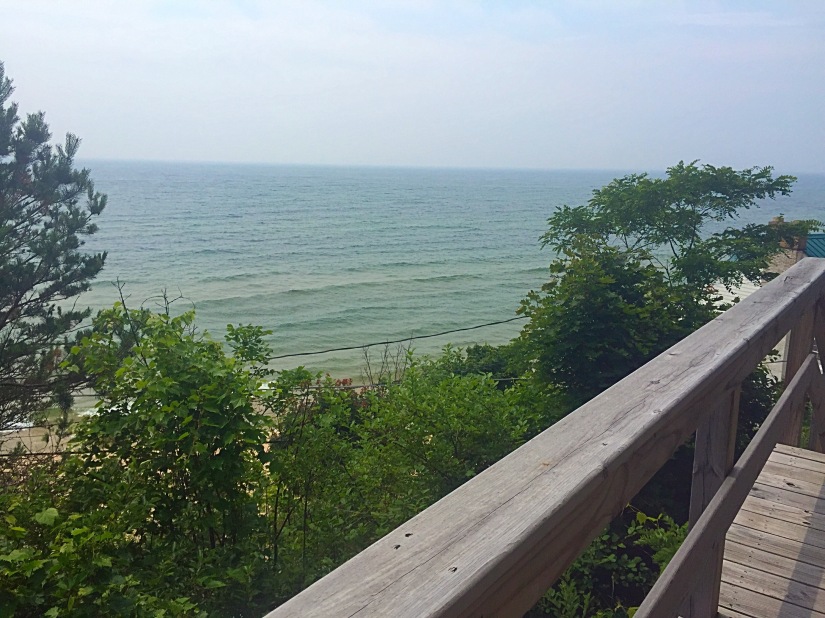 So that’s our trip! We both had a great time and it was neat getting to see what Will loved doing on his family vacations growing up.  Now- to just get him to MY FAMILY VACATION NEXT YEAR!!  I sure can’t wait… For warmer water! =)

So to say goodbye, I’ll leave you with a pretty sunset picture from the canal on our last night and a picture of us with a rather large Statue of Liberty! 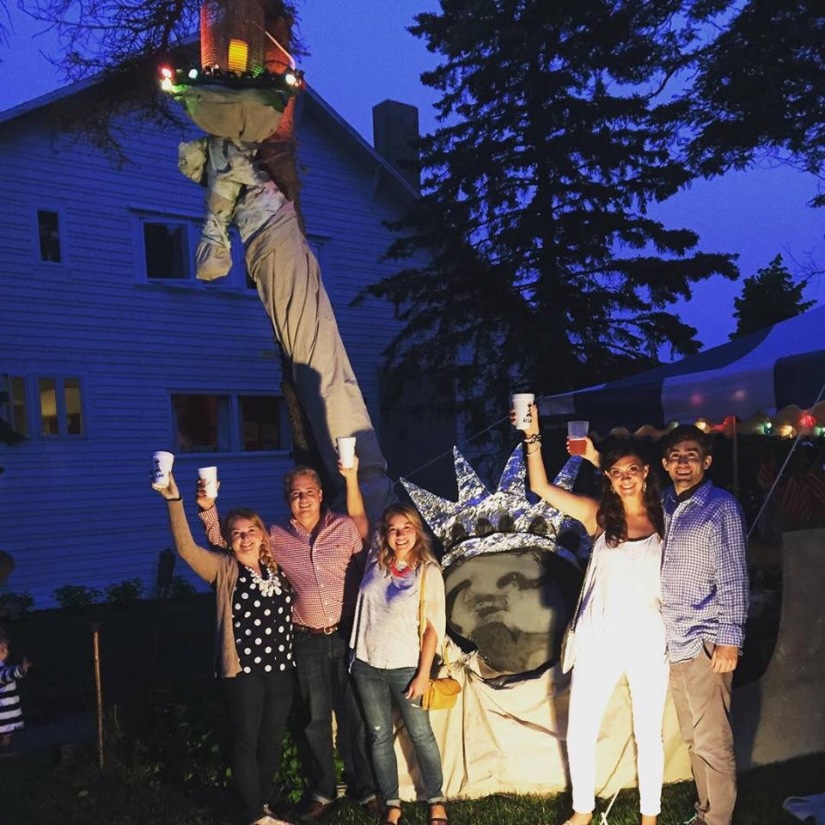