This holiday season has been such a great one!  This is the second set of Halloween/Thanksgiving/Christmas/New Year’s with Annabelle Grace, and she is so mobile and has such a personality, that it has made for such a fun holiday season with our families and friends, and really just the three of us together!

November finally meant a little slowing down for Will, which was nice, because we enjoyed getting to see him a little more regularly again!  With November came some cooler temperatures though, so we haven’t been able to get outside quite as often, or even as long really when we do.  Unfortunately, one of the downsides to being in a smaller town means there isn’t anything offered for little bitty toddlers to do on a weekly basis- where in a big town you tend to have lots of different baby/toddler groups and classes you can take your littles too, and even the libraries often offer story time once a week or every so often.  Since we don’t have any of that to do that doesn’t require driving some sort of distance, Annabelle Grace and I at least started taking our own weekly trips to the library.  They don’t have a story hour, but; we’re at least able to get out of the house for a little while an we read a few books together while we’re there and then she picks a few out to bring back home and we read throughout the week until we go back again!  Annabelle Grace has always been a lover of books, so she actually really seems to enjoy our time spent at the library! 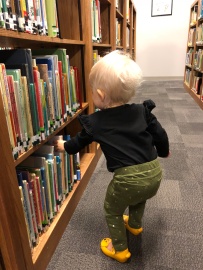 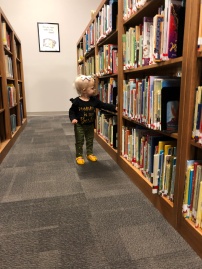 We still bundle up and get outside as often as possible, even if it is only for a few minutes.  She still seems to love the outdoors, and I love that quality about her.  I know it may not last forever, especially with technology being such a HUGE part of her life to come, so I push to have any time outdoors or doing anything during the day that doesn’t involve technology.  (We still never leave a TV on in our house, and I never watch TV around her unless it’s the super occasional “Word Party” episode from Netflix.)  So far we’ve been able to avoid using iPads and electronics as toys for now too- and it’s not always easy- but I do like that she seems pretty good at entertaining herself without these items when I’m cooking or cleaning!  I’ve also discovered that she loves to help me clean!  It does take TWICE as long, if not longer to get anything done, but oddly enough, my patience is okay with it!  If I’m putting dishes away from the dishwasher, she pulls them out and puts a few away (in the correct cabinets/drawers!) or hands them to me.  If I vacuum, she likes to help push the vacuum.  If I am wiping down the cabinets, she gets a napkin or cloth and helps me wipe! Mopping, she likes to help dip the mop and help me mop too! She loves opening the curtains in our room and also likes helping put the decorative pillows on the bed when I make it in the morning!  It’s really quite impressive how much of this stuff she will do or actually try to start doing each day if I haven’t yet! (I guess it helps me keep the house a little cleaner?!)

We take weekly trips to Walmart (not always fun because, well, it’s Walmart,) and she loves to “help” me cook.  She will beg for me to pick her up so she can see what I’m doing.  Thankfully she’s much more balanced now, so I can often pull up a chair and let her stand beside me while I cook.

November did bring us our first snow of the season!  It was perfect too!  Not messy and in risk of losing power, just a perfect tiny amount to cover some ground and get out in for a few minutes!  Since our house is surrounded by some of the farm fields that the grow crops in, the ground was mostly just dirt at the time and the snow stuck to it better than it did the grass!  I bundled us up and took us out!  She loved it!!!  (She already loves to stick her hands out and feel rain, so the snow was a whole new experience!)  We were able to get some great pictures! 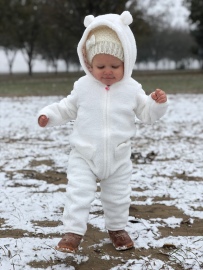 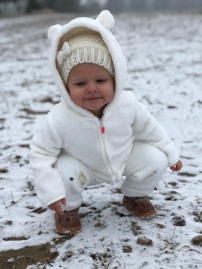 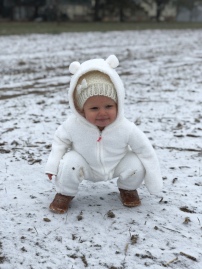 We signed off on our very own farm ground this month, so of course we drove out and took a picture with some of it!  They are growing wheat on it at the moment, so I really hope this spring before it’s harvested we can get out and do some family pictures with it since we’ll be a family of four at that point!  They would be so special to hang in our house! 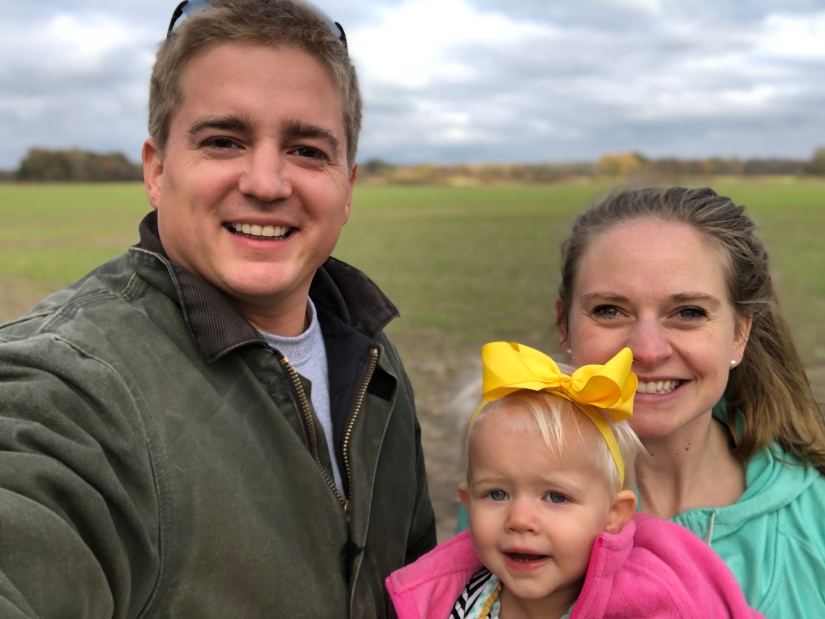 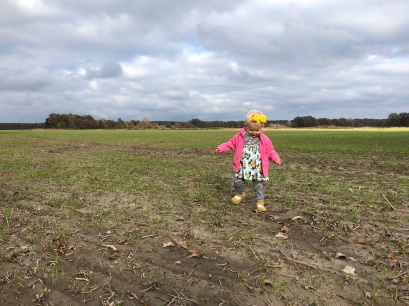 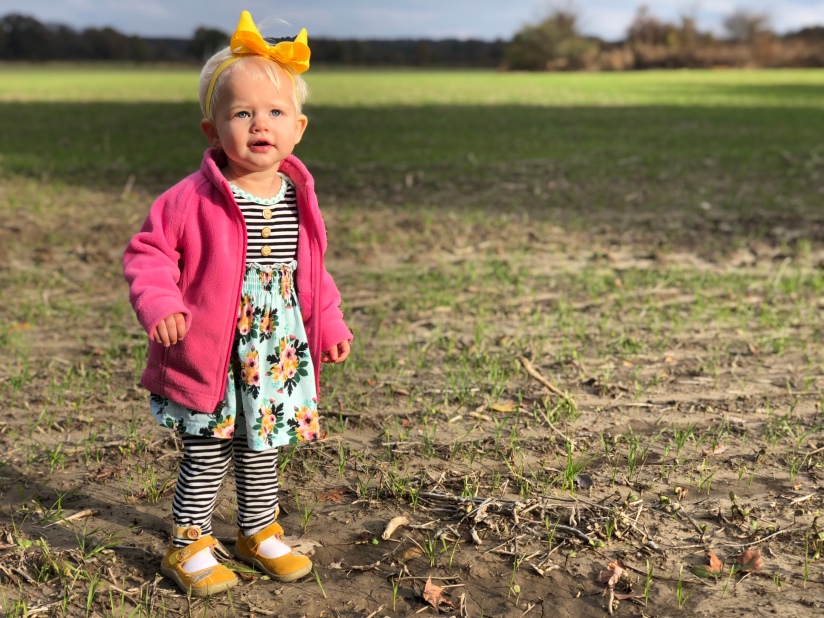 If you’ve stuck with reading any of these most recent posts, or even just made it this far into this post, we’re finally to Thanksgiving week!  (Seriously, this has been so much to catchup on recently, but I’m so glad I’m finally taking the time to get it done!)  Since we got married, we have flipped Thanksgiving and Christmas with our families each year.  So this year was Thanksgiving with Will’s family and Christmas with my family in NC.  Next year, they will flip again and it’ll be Thanksgiving in NC and Christmas with Will’s family.  As our children get a little older, we’ll obviously start altering Christmas some so that we can actually let them wake up in their beds on Christmas day and we can start some of our own special Christmas traditions which means a lot to both me and Will. (No worries to either of our families- we would still see you in the month of December- those plans aren’t even finalized right now!)

Anyhow- back on topic!  Thanksgiving in Helena/Memphis this year!  We had a wonderful time!  Will’s brother Clancy and his fiancé, Natalie, actually came to visit us for a night in Helena the night before Thanksgiving!  Clancy wanted Natalie to see Helena, and we love visitors, so it worked out for everyone!  They spent the afternoon and evening with us after having lunch with MommyAnn and Grandaddy.  They said they wanted the “whole Helena/Delta experience,” so Will gave them the option of pizza or fried shrimp for dinner.  They picked fried shrimp- so, we took them on a quick farm tour (in Will’s truck- that they were warned was dirty! hahahahaha) and then drove them in that same truck to Clarksdale, MS to eat at a place called Ramon’s.  It is a HOLE IN THE WALL.  It does not look super clean and is super dated, but we do like the fried shrimp and have eaten there several times ourselves. 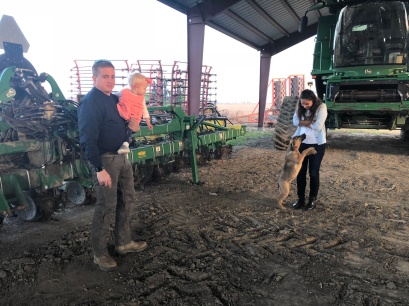 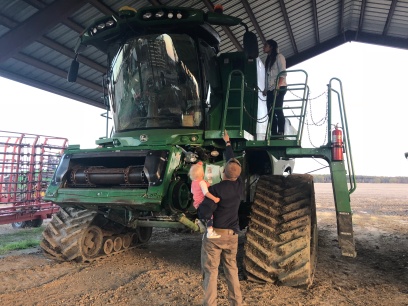 Natalie and Clancy also brought Annabelle Grace her flower girl dress and we tried it on her!  It is absolutely precious!  We had a wonderful morning hanging out before heading to Will’s Uncle John and Aunt Kelly’s house for Thanksgiving lunch!  Will was in charge of the turkey, so part of his morning was spent prepping and smoking the big, big bird! 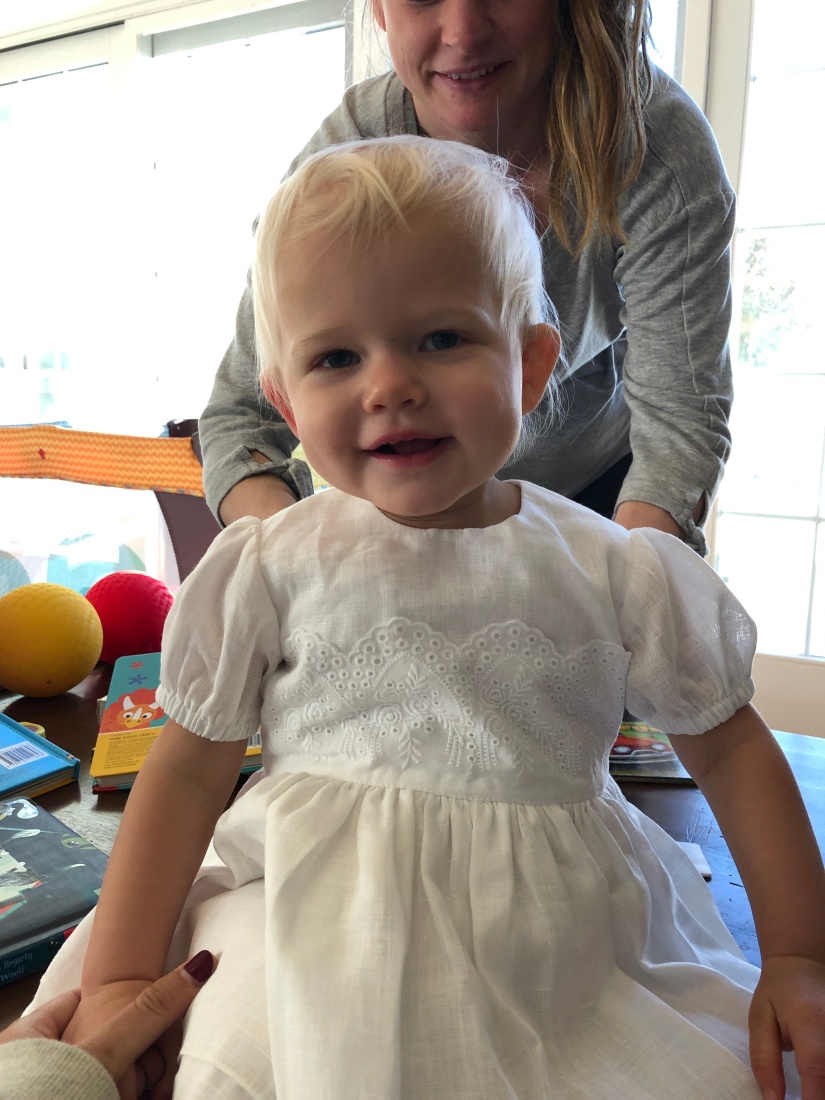 One tradition Will and I have always had was to have donuts from our local donut shop on Thanksgiving morning for breakfast.  The first year we met (2012) we actually went on our first few dates the week leading up to Thanksgiving- actually all of our first dates were literally each day from the Saturday before Thanksgiving, up until breakfast together on Thanksgiving morning.  We apparently really enjoyed each other’s company right from the get go!  So, since that morning, we have had donuts for breakfast on Thanksgiving, if we are in town.  Will went bright and early and picked up donuts, kolaches, and caffeinated coffee for Clancy and Natalie since I’m only drinking decaf right now!  Will, Annabelle Grace and I all had ours together before the two of the woke up! 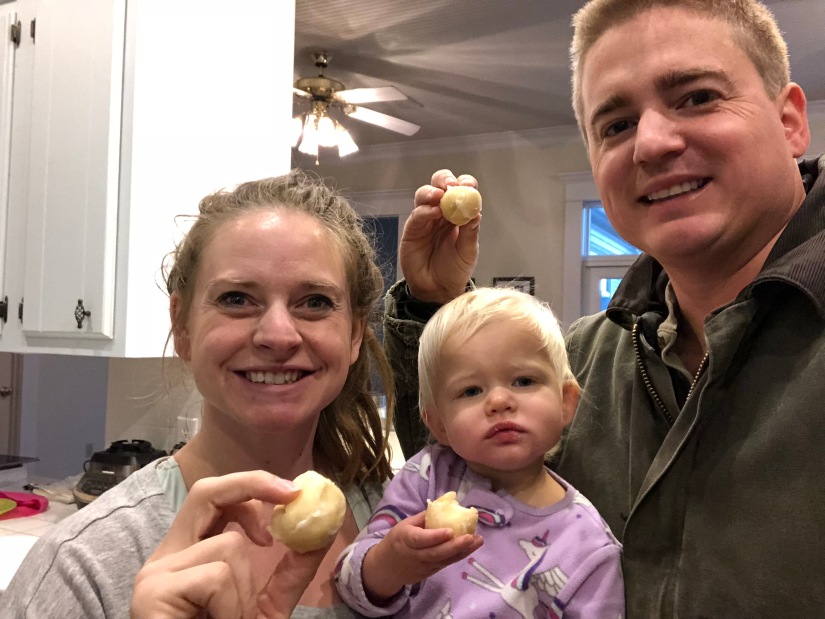 Thanksgiving lunch itself was wonderful!  Both of Will’s brothers and their families were able to be here, so it was one of the first actual holidays that we were all together at one time!  We took several family pictures, enjoyed great food, and caught up with a lot of the rest of Will’s family too!  His grandparents, aunt and uncle, cousins, and more were all here this year! Oh- and Will’s turkey turned out wonderfully again! This was also the first Thanksgiving meal Annabelle got to eat!  Last year she was only about 3 months old, so she was strictly nursed then!  Now she eats anything and everything, so it was fun seeing what she decided she liked!  Apparently canned cranberry sauce, sweet potato casserole, and green bean casserole were her favorite items, but she ate/tried most everything! 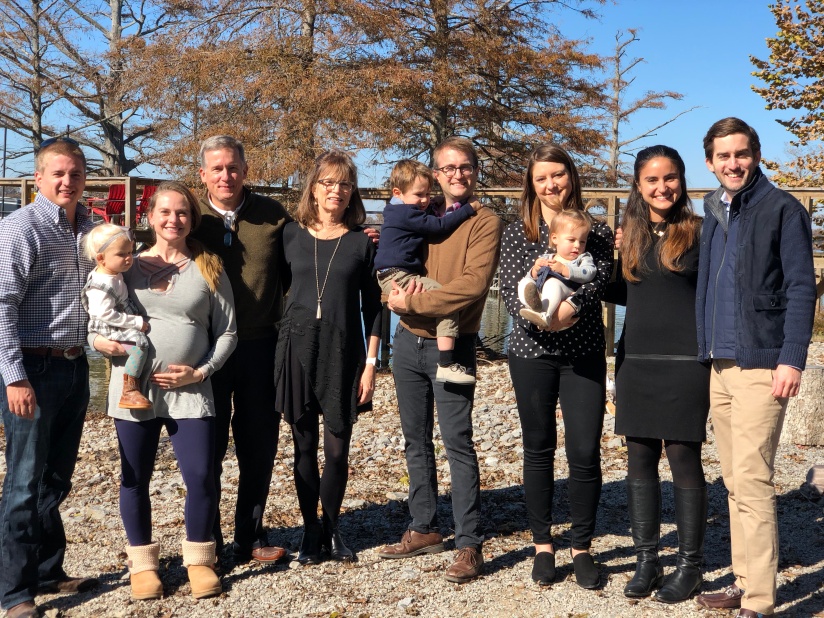 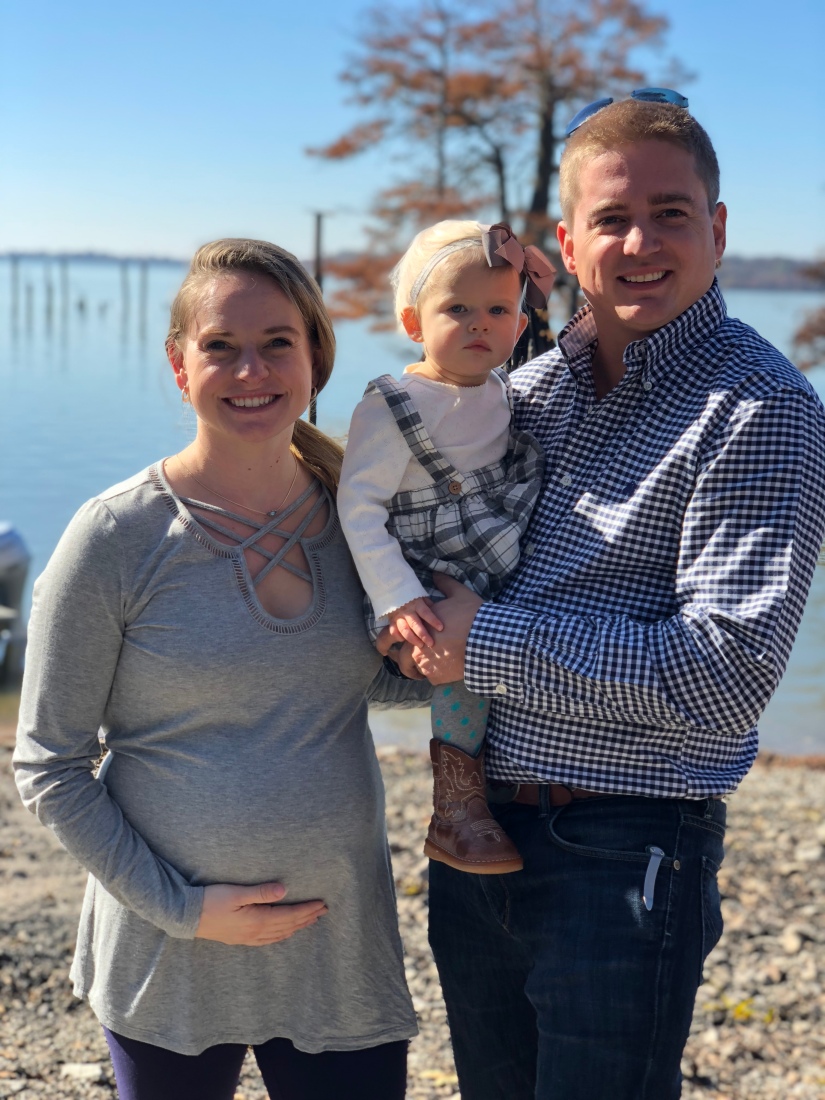 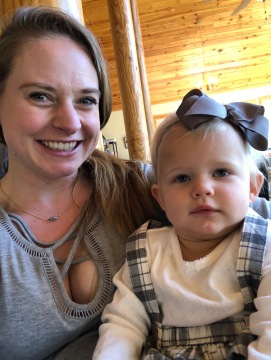 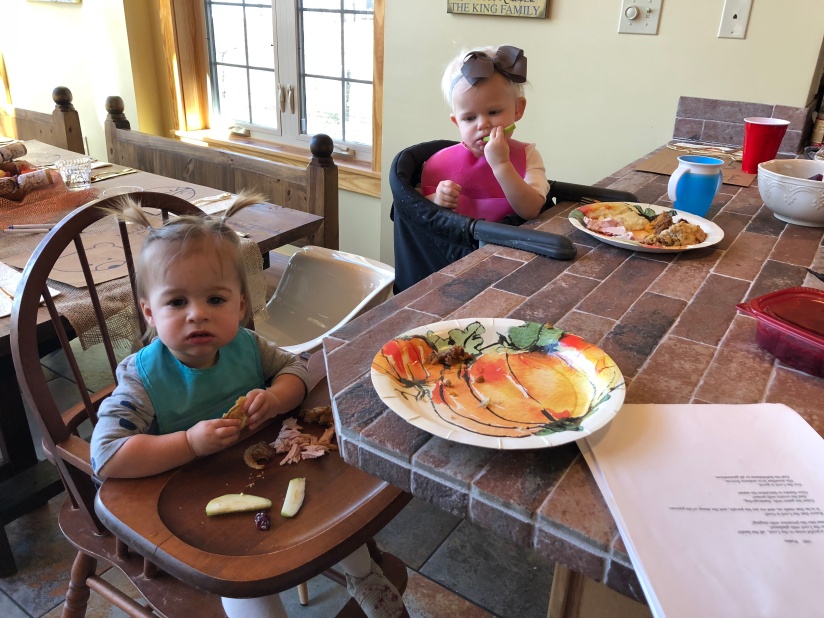 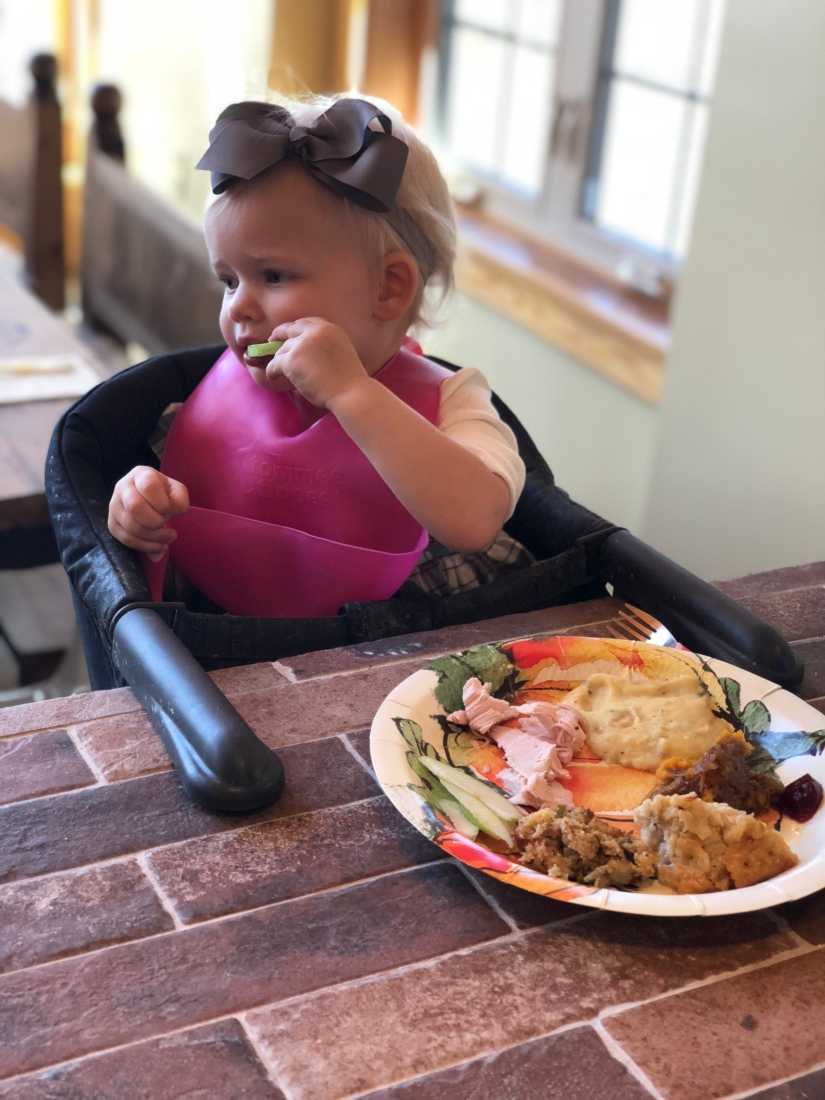 The rest of the weekend we spent our time in Memphis! We ALL went to the zoo and had a wonderful time!  Several of us wore our matching Christmas pajamas, and we had lots of good family meals!  Annabelle, Jules, and Sam got to spend a lot of quality cousin time together as well and that was a lot of fun to watch! 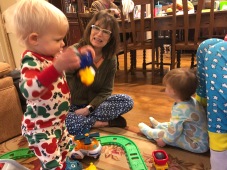 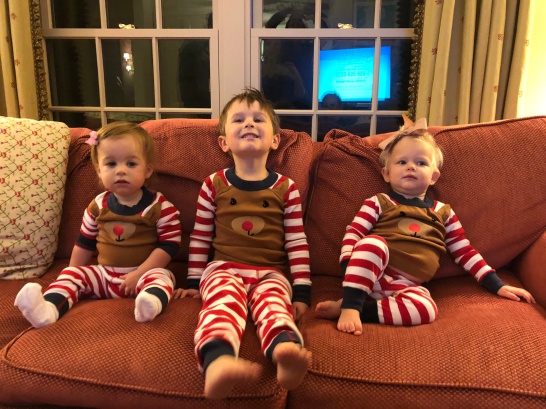 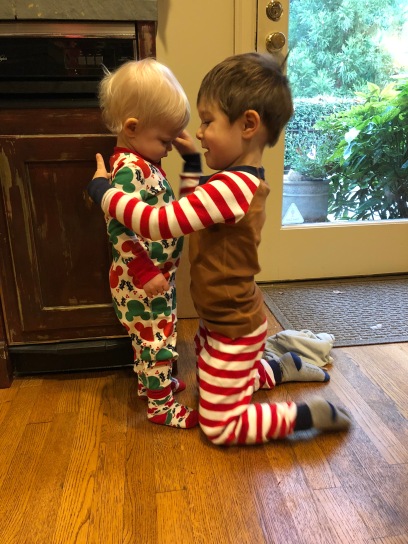 The zoo really was such a wonderful addition to our Thanksgiving week!  Unfortunately I don’t have a lot of the pictures from that outing since most were taken with Will’s phone! I didn’t realize I never got them from him!  None the less- good times were had by all!  We even got to see the hippos out of the water, and we haven’t seen that before! 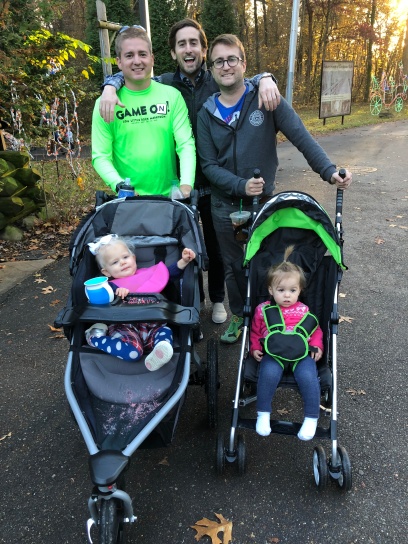 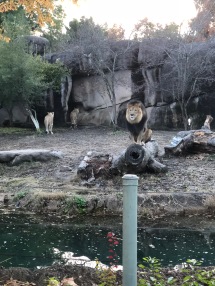 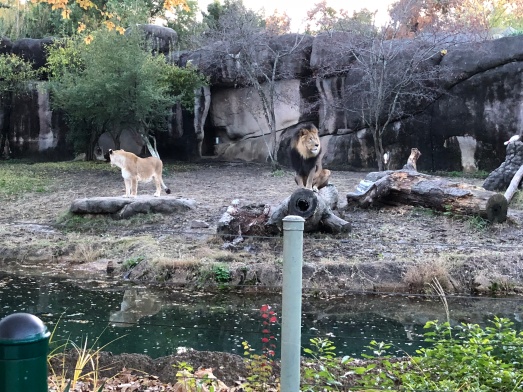 Once returning to Helena after Thanksgiving we got to see Will’s grandparents and hang out with his cousin Katy and her daughter Anna Clancy for a little bit!  Fun getting to see the two of the together as well! 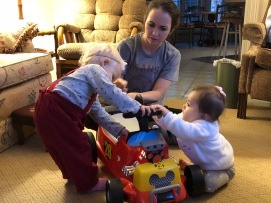 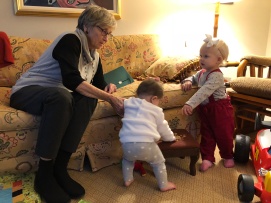 Unfortunately we ended November with Annabelle’s first bad head cold, and I had a horrible runny nose and cough as well.  Thankfully she never got so bad that we felt we needed to take her to the doctor, but the poor girl’s nose was SO runny and congested.  We kept tylenol and lots of fluids in her and she did alright.  I wasn’t able to really take anything since I’m pregnant and pretty much had to let my cough run its course.  I got really good at sleeping sitting up again! 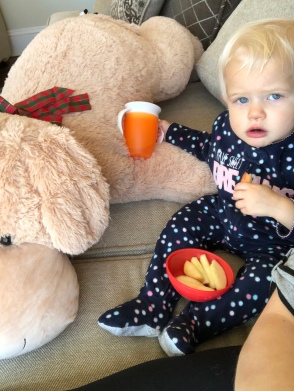 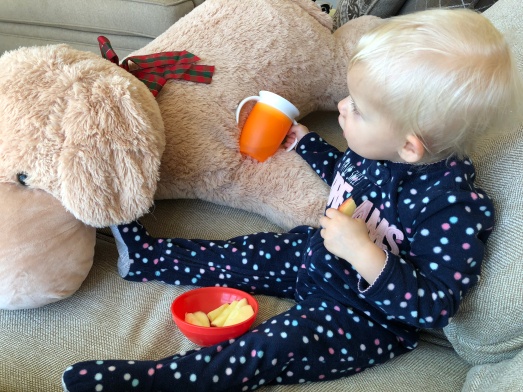 So, there’s November and Thanksgiving for ya!  Stay tuned for our December/Christmas update soon!