Time for yet another very delayed update! BUT, I don’t want to not document our 2018 year, so here it comes! 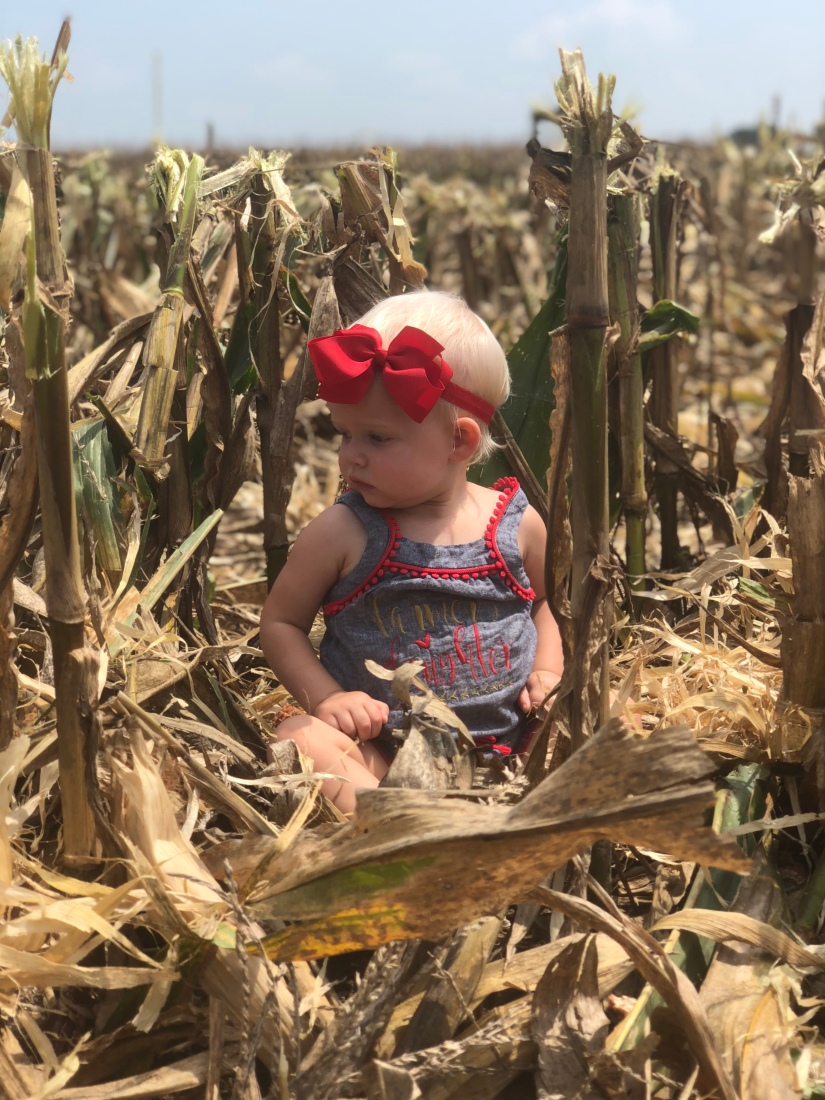 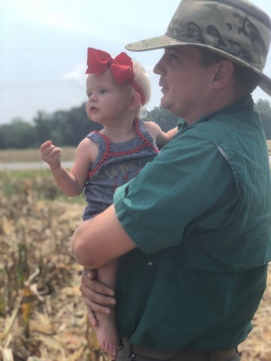 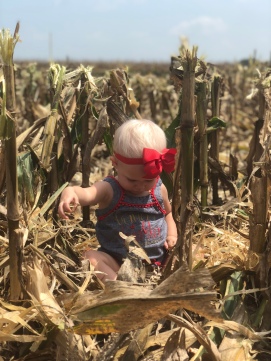 Fall this year was a BUSY, BUSY time for us!  Harvest this year was longer and harder than it has been in the past, and harvest time in general is usually a hard, long season to begin with!  Will worked several seven day weeks, and several 9:00-11:00pm nights, in a row.  Annabelle Grace only saw him because as a family we chose to get up early with Will so that we could at least have quick family breakfast together, or Annabelle Grace and I would take either lunch or dinner to the farm so that we could eat with Will at some point during the week.  We also used FaceTime most evenings during her bath so that she and Will could tell each other goodnight- thank goodness for that technology.  Being pregnant, with a toddler, and a very busy husband led to some very tired days during my early pregnancy this time around!  We were happy for Harvest to come to a close this year!

We had plenty of park time!  Most everyday I tried to get Annabelle Grace outside for a while- we typically went in the mornings right after breakfast since the temperature was usually the coolest at that point and the mosquitoes were a little more bearable.  (Mosquitoes were SOOOOOOOOOOOO, SOOOOOOOOOOO bad this year.)  I was able to walk/run 1-2 miles most mornings while she had a snack and then she was able to play at the park and swing!  Our girl is a big fan of the dirt and loves to walk and climb on everything! 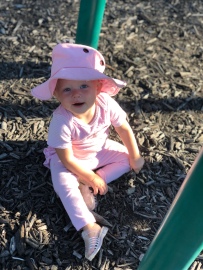 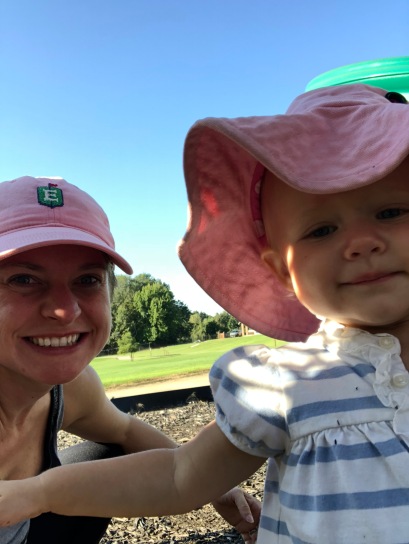 We made it to a home football game at Desoto (the school I previously taught K3 at!)  This was Annabelle Grace’s first game, so she was dressed to match! 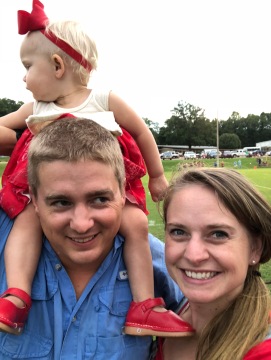 We unfortunately had our first (and so far only) run of really bad diaper rash!  We never had to go to the doctor for it, but did have several days of wearing no diaper and lots of diaper cream.  On the bright side- it gave me a lot of hope for when potty training time comes around!

We were able to continue picking blackberries from our bush throughout most of the fall since the weather stayed so warm!  Annabelle Grace now LOVES blackberries and got excited every afternoon we went outside to run to the bush to watch me pick them.  I consistently said “don’t touch, it’ll hurt, ouch ouch!” and would wave my hands while picking them to keep her from touching it- so she still thinks it’s the “ouch ouch bush” and will wave her hands and say “ow, ow” anytime we go by it, even now! (She never did touch it though- so I guess it worked!) 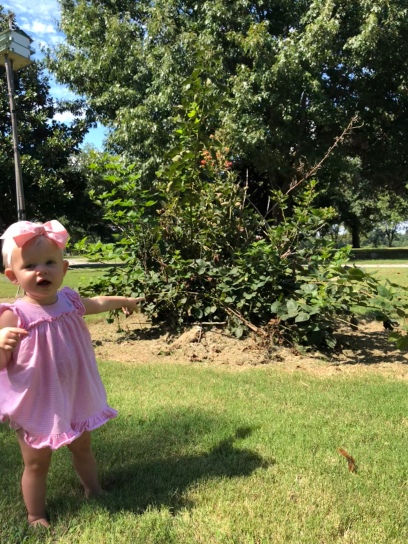 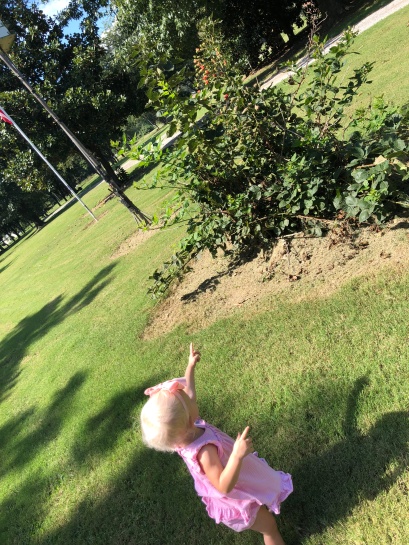 On top of our morning walks at the park, we usually walked up and down our driveway to get the mail, pick berries, and just get a little quick fresh air.  Since we live on and around so much land- we also have neighbors who have a lot of land beside us.  They grow and harvest pecans, and this year had hay baled this fall.  Every day while walking down the driveway I would point out the hay bales to Annabelle and she would wave.  she started looking that direction each time on her own and would wave before I could say anything since she thought I always meant “hello!” 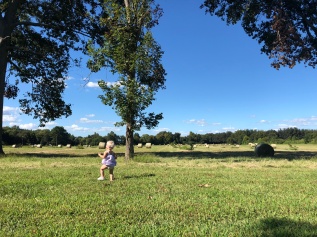 We did have one big appointment at Lebonheur Children’s Hospital.  For months and months, Annabelle Grace has had a tiny little “bruise” colored lump on the upper left side of her chest.  Our pediatrician has watched it as well, and in all these months it has never seemed to bother her, doesn’t seem to hurt when touched, and doesn’t appear to have gotten any bigger, but also hasn’t gone away.  She scheduled us an appointment just to have it checked out by a second set of eyes, and thankfully for now they don’t seem concerned.  For now it just basically a “weird” vascular thing, mostly cosmetic they believe (which we aren’t worried about at all)  They did recommend coming back in about 6 months and continuing to have our doctor check it out at regular appointments as well.  As a mother I have actually been SO much more laid back and not a crazy germaphobe like I actually thought I would be- even Will can attest to this fact.  However- there are a few things I still have my moments with- like doctor’s offices and hospital floors.  Annabelle and I seriously waited OVER two hours to be seen, so I had her out of the stroller to move around…. next thing I know, she was laid out on the floor.  I was SO grossed out, but also realized at that point, she was already down there- so I at least took a picture of it, then quickly picked her up!

Annabelle Grace got to experience her second Blue’s Fest!  This year she got to eat some of the food and she once again rode in her stroller with me and Will while we did the Flour Power 5K!  Both Will and I got medals for our age groups, and Annabelle Grace enjoyed wearing them for us! 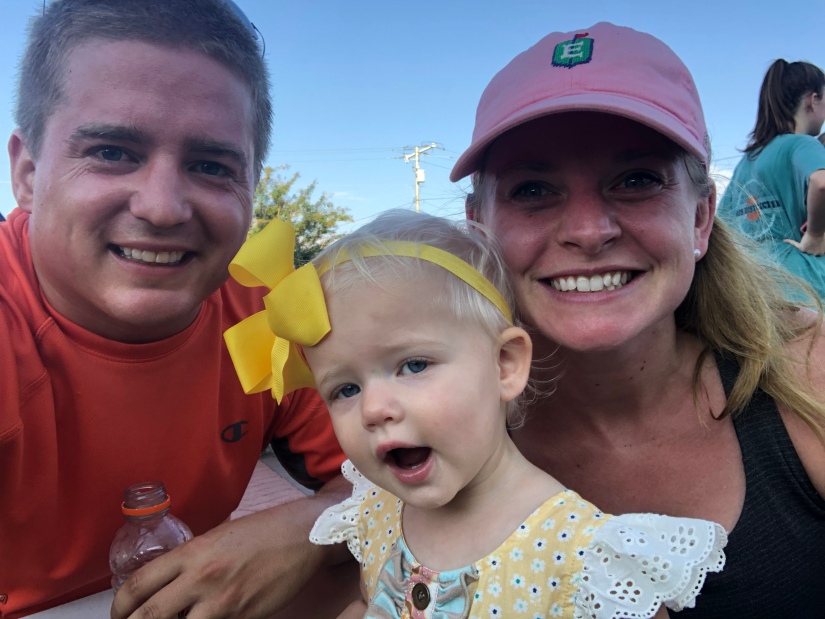 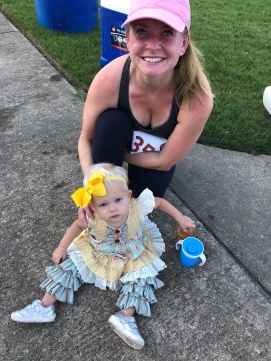 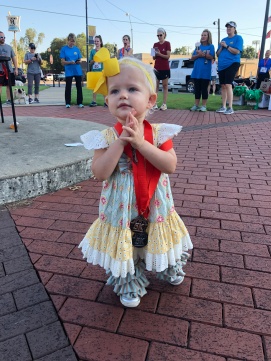 We took Annabelle Grace to her first pumpkin patch, had lunch, saw a mini petting zoo, did a corn maze, slid down a slide and picked out a tiny little pumpkin!  Her favorite part was the donkey, and her least favorite part was probably the slide!  Will and Annabelle Grace slid down the slide and none of us realized how quickly it would stop at the bottom- so she basically catapulted out of his arms.  It was terrifying for that split second, but ended up being perfectly fine and didn’t have a scratch anywhere… she was quickly made happy by getting to go and see the donkey again! 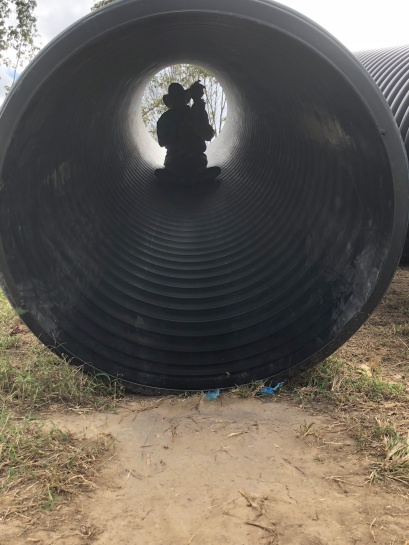 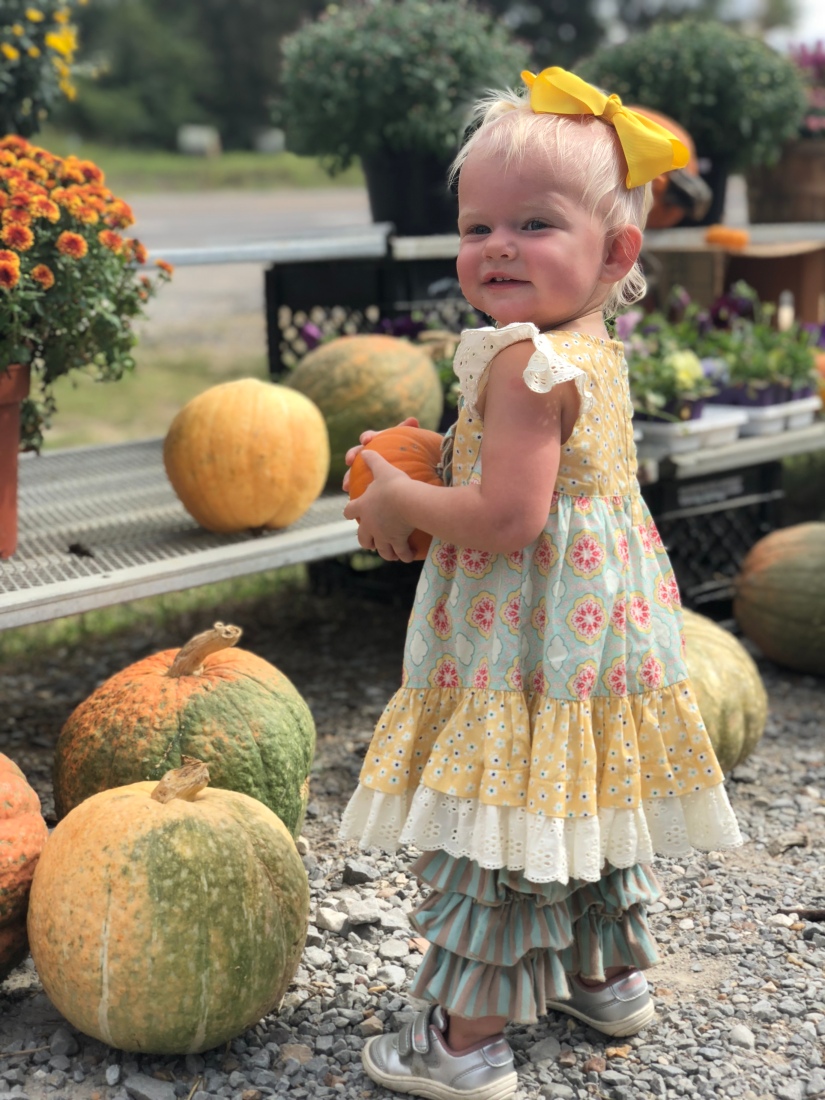 We had plenty of warm weather on into to mid and late October so we continued to have plenty of outside time! 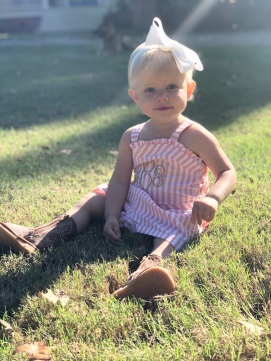 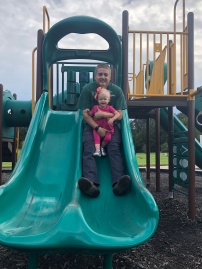 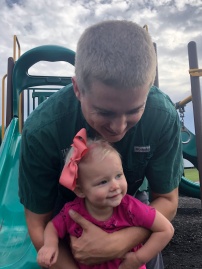 We had family photos taken by Natalie Gray Photography- several that we used for this year’s Christmas card! 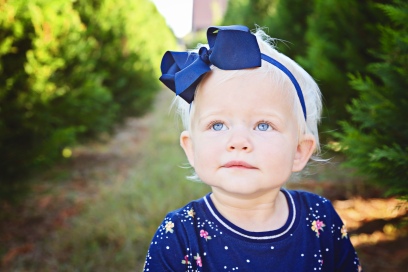 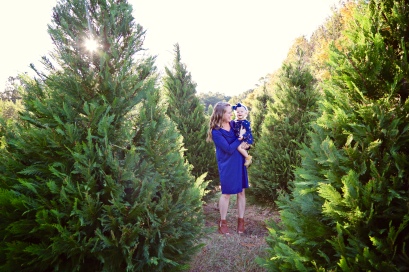 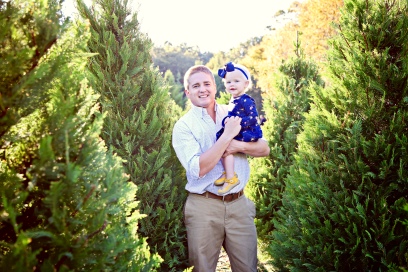 To finish off this fall season, we of course celebrated Annabelle Grace’s second Halloween with us!  Last year we were on top of our game and had family costumes! We were all dressed as elephants!  This year we were not quite as prepared and waited until days before Halloween to get Annabelle Grace a costume…. there wasn’t much to choose from- however, there was a Minnie Mouse costume, which ended up being perfect since we were planning to go to Disney World anyhow!  We took her to Desoto’s Trunk or Treat which ended up being indoors due to the rain.  She had a good time trying to play the games and we got to see Will’s cousin Katy and her little boy Henry! 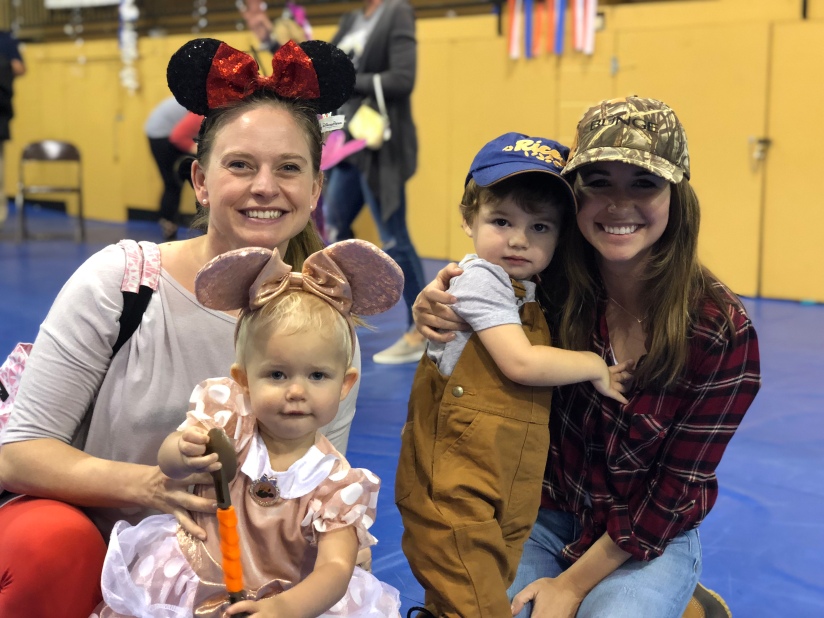 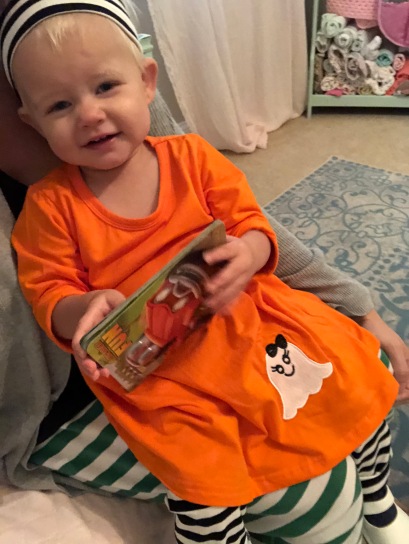 Fall was definitely a busy season for us with Will being so busy and tied to the farm, but we still managed to squeeze in some really great family memories!  We always try to make the most of any little second of time we get together, or we find ways to make the time!  These few months since Annabelle Grace’s first birthday we have seen her change so much!

I look forward to adding even more recent posts about Thanksgiving, Christmas, and Disney World- so stay tuned!